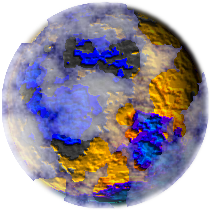 Delegatus Eisen had established himself as a leader who would get his forces killed in at the first attempt. According to tactical surveys of the area the vicinity Eisen was in was clear of Death Guard. Feeling save with his bodyguard of Gorgon Terminators despite his still defunct master crafted spear. The auspex told him that unidentified marines were nearby and a cybot sized presence was straight ahead. Flanking a tactical unit Eisen led his Gorgons against what turned out to be a Cortus Class Contemptor Dreadnought hoping the hammer of the sergeant and the chainfist would damage the hulking giant. Blows were exchanged and the Contemptor damaged. The tactical squad of ultramarines closed in on the fight and emptied their bolters into Eisens' squad just as they managed to destroy the Contemptor. Reinforcements appeared for the traitors in the form of a Centurion and an attack bike, the second unit of Gorgons was nowhere to be seen. The terminators were rushed by the tactical squad. Most dangerous were the Consul and the Centurion toting power fists and vicious power daggers. Both sides lost marines but the numbers began to tell and Eisen was the last to fall with some remaining traitors still standing. The second unit of Gorgons appearing late on the site of the carnage tried to extract the heavily wounded Hohlkopf loosing one of their number to bolter fire when falling short in their charge and another by a precise shot from the multi melta used by the attack bike coming close. In the following carnage no lifes were spared. As the dust settled a lonely Alpha Legion sergeant surveyed the scene and contacted HQ to get reinforcements.