Archmagos Zanderval glided down the station corridor upon his abeyant with his personal Castellax, Unit 841. Trailing behind them followed fifteen Adsecularis Tech-thralls. Zanderval and his small retinue had arrived at Dogon station a few weeks ago after their Explorator Fleet had followed rumors of potential STC data buried deep in the mining cores of Kug'Arkal. They had yet to make planetfall due to a sudden attack by traitor forces on the station. Their vessel, "The Convergence of Barroth" had made emergency undocking maneuvers in order to meet the enemy fleet in combat. Archmagos Zanderval had only a small delegation with him at the time and now traveled down the halls of Dogon Station in search of friend and foe.

A small rune lit up on the abeyant's communications panel. The Archmagos reached out with a mechandentrite and keyed the panel to receive the incoming coded vox transmission.

"Well met Archmagos Zanderval. This is Sargeant Antonius of the XIII Legion. What brings the Barrothian Technofane to Dogon Station?"

"++WELL MET SARGEANT. MY READINGS HAVE SHOWN THAT ENEMY ELEMENTS OF WHAT APPEAR TO BE XIV AND XVIII LEGION FORCES AMASSING IN THIS AREA++"

"XIV and XVIII? The Sons of Barbarus are known traitors, but Vulkan's Salamanders? What on earth can they be doing here, let alone fighting under the banner of the Warmaster?"

"++READINGS INDICATE THAT THEIR FORCES ARE AHEAD. I AM TRANSMITTING MY COORDINATES TO YOU NOW. PERHAPS WE CAN UNRAVEL THIS MYSTERY TOGETHER++" 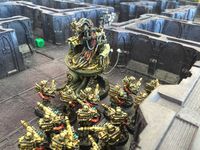 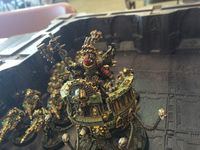 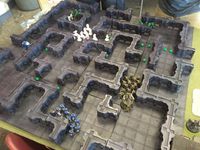 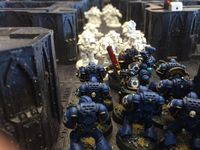 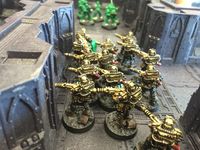