With both forces reaching a certain level of impasse the Campaign entered a new stage of attrition; both factions launching harassing assaults against each others strongholds in an attempt to break them and send their respective armies into disarray. Some small sorties were sent out against the previously ignored Hive World of Uruq, with the Loyalist successfully thwarting two of the Traitor invasion forces, with the third managing to secure a foothold on the planet.

Likewise the Loyalists launched a number of well coordinated assaults on both Dur-Kazit and the recently conquered Knight World of Cipaar, meeting some success but not quite enough to break the enemies hold on the planets, though significantly weakening the garrisoned forces there. In return the Traitors attempted to do the to the Loyalist new head quarters on the Forge World of Baylon and their long secured Knight world of Kych, however these attacks were met with stalwart defense and repelled soundly.

The sum results of the campaign strikes in this latest stage were significant only in the number of forces deployed and Garrisons destroyed, while only a few territories were gained by either side and most of them swapping hands.

Reports from the Field

“Comfortable, traitor?” came the cold, emotionless voice, wrestling Kyros V’Ren from unconsciousness. The first thing Kyros did was attempt to reach for the hilt of his light blade on his belt, but he found his hands were restrained, as were his feet.

“Where am I?” Kyros asked, focusing his feelings, remaining calm. Striding out of the shadows came the imposing form of a Space Marine, in the yellow scheme of an Imperial Fist. He stood in badly scarred Artificer armour, and wore no helm, revealing a scarred face, which was contorted with a grimace. An ornate power axe hung from his belt, and a bolt pistol was holstered in a pouch on his leg.

“It does not matter where you are, you’re not getting out.” The Space Marine said, walking slowly toward the incapacitated New Order leader. Kyros struggled against his restraints. “Do not worry, I’m not going to kill you.” The Astartes added, uncharacteristically chuckling. “I have… other uses for you…” he said stopping about half meter from Kyros. The Astartes hand suddenly lurched toward Kyros, and he braced himself for the impact, but the Space Marine grabbed his hood, and tore it off from his cloak, revealing the scarred, bald form of Kyros’s head. The Space Marine smirked, before tossing the torn hood too the floor.

“Do you want to know how I got these scars, traitor?” the Fist asked. Kyros remained silent. “From your men, twenty of whom opened fire on me within rapid fire range. Yet, here I stand, still very much alive. How does that make you feel?" he asked, daring the New Order leader to answer.

“Disappointed, that even if you survived, you still got removed from the battle by normal, un-augmented humans?” Kyros asked, trying to hide his emotion. The Imperial Fist snarled, then removed his power axe from his belt, and started tearing at the wall around where Kyros was restrained.

“If it were up to me you’d be dead.” The Astartes managed, hooking his axe to his belt. He turned and walked toward the door, opening it to reveal four kneeling Imperial Fists, before turning back to Kyros and opened his mouth to say something, but obviously thought better of it, and turned and shut the door. 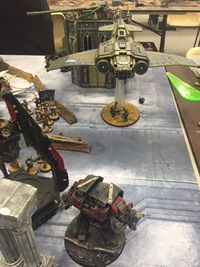 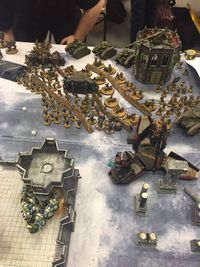 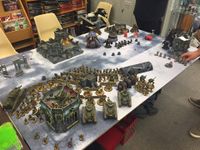 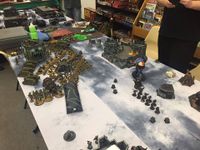 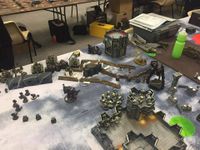 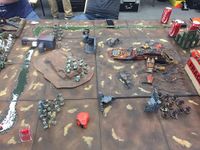 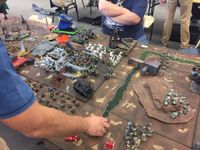 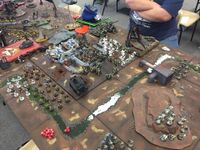