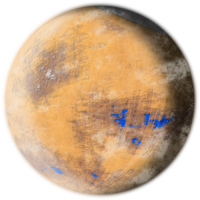 As the first shots were fired in the opening salvos on the surface of Raynes the Mechanicum forces on Sudeen executed their own plans; thousand of troops including mercenary Astartes and allied forge world levies launched surprise attacks on Imperial forces which had landed on the desert planet. Many such forces were caught unaware and were cut down in the onslaught while the others either regrouped or withdrew from the combat area all together. In a short but bloody gambit the former system rulers had reclaimed their world and established an extensive defensive line to prevent Imperial counter assault. However not all went to plan.

As part of their attempt to oust the Imperial presence on Sudeen the conclave had revealed their last remaining orbital weapon platforms, one which had survived the Compliance action and remained hidden since. This powerful satellite housed weapons capable of targeting both planetary and stellar targets with pinpoint accuracy and devastating effect, but the Imperials were ready and waiting. Having long suspected that the forge lords had one or more such weapons coveted away the Imperium had a standing Crimson Level system wide warning to all senior Astartes commanders who entered the Centrumeh Gate on the remote chance of conflict; paranoid but on this occasion prudent. The moment the station powered up and commenced targeting protocols, both Loyalist and Traitors forces sent multiple boarding parties to the platform, quickly overcoming the small Mechanicum garrison and seizing control of the asset.

Immediately the weapons were turned against targets other than those invading Sudeen, dropping one of the planets major defenses and allowing the Imperial forces to reenter orbit and begin reinforcing their embattled ground forces. The counter offensive from the newly strengthened Imperial forces was brutally effective, punching clean through the Mechanicums defensive lines and breaching the underground forges in multiple places, creating a myriad of close combat skirmishes beneath the ground. Above ground the war continued both against the secessionist faction with their allies and between the two rival Imperial forces, destroying large portions of the limited infrastructure around the forge entrances.

One such installation located on the planets perpetual dark north took significant damage to its power supplies shutting down a number of the automated defenses further endangering the besieged forces. Redoubling their efforts and concentrating their forces the secessionist units entrenched themselves and systematically began eliminating the Imperial incursions while making significant gains on the surface, severing supply lines and isolating forward enemy units underground, cut off from their main lines. This tactic resulted in two things; a nearly impenetrable defense ring around the major forge complexes and a situation where there were hundred of isolated Imperial forces trapped behind enemy lines.

While the former was exactly as planned, the latter produced a seriously unpredictable side effect; pockets of highly trained and desperate warriors willing to sacrifice themselves in order to sabotage the facilities. Rather then attempting to fight their way clear as the senior Magos had anticipated, many of the isolated enemies instead focused their efforts on destroying the vital infrastructure within the complexes themselves. Unable to reassign significant numbers form the front lines as they were required to hold off enemy reinforcements, the meager secessionist forces within the forges fought as best they could but couldn't prevent mass damage to the primary Power Reactors. With the main reactors off line and Mechanicums Enginseers unable to access the impacted areas critical systems began going offline, two such systems would prove a turning point in the war.

The first system was linked to the planets primary drilling installation; upon its deactivation the drilling unit should normally have automatically shut down, however it too had sustained heavy damage from the surface war and its safety protocols were currently offline. Independently these situations would not be cause for worry, coupled however, it spelt disaster. The drill heads continued to operate without the integral cooling protocols and without the safety overrides the entire facility quickly became unstable to the point triggering a atomic explosion. The force of the blast triggered a cascading collapse of nearby tunnels which in turn triggered further explosions which then dominoed into even deeper parts of the complex, starting the literal collapse of the planets surface hundreds of kilometers wide and rapidly expanding. This in itself removed the Sudeen Conclave from the war, while having superior numbers, all of their effort was refocused from war to self preservation.

The second system was a series of Data bank fire walls; again something which in itself was not a threat, most of the information stored within the banks were simple production tallies, mining quotas, and other menial records. One small cogitator linked to those data cores however contained something more. To access such a path to the data though would require access to one of the few Data Servitors equipped with the correct protocols, accessing the correct cogitator point and being directed down the convoluted system paths, something which was statistically unlikely (reported to be .0078% chance of happening). Whether the corruption of the Warp surrounding the Thousand Sons force manipulated the occurrence or if it was indeed that 0.0078% odds happening, the series of requirements lined up and the data cache was accessed. Skimming through the data the Astartes commander immediately transferred a copy to his personal data core and ordered his force and every other allied unit to assist him in fighting clear of the underground death maze. Less than a day latter an anonymous data feed delivered a decrypted file direct to the lords of House Horne; a file detailing the plans of the Sudeen Conclave to sacrifice the Knight House, their former allies, in a covert attack which would trigger all out war on their planet, dooming the Knights, but allowing the Mechanicum the opening to begin their bid for secession.