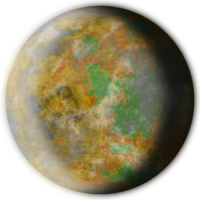 Crippled and dying, the Traitors Cruiser Accipiter has entered a decaying orbit around the Knight World of Raynes. Together with the revelations that their former masters orchestrated the initial attack on the world, dishonouring the Knight House, the Lords of House Horne have sundered their ties all factions and turned the entire House Freeblade.

While the Knights attempt to evacuate their doomed world, the Imperial forces continue to wage war in an attempt to secure the remaining relics and fight their way clear of the oncoming disaster. However the boarding actions which crippled the Accipiter has triggered an intense void war with multiple boarding actions underway and waves of bombers and fighters attempting to delay the enemies evacuations.

With the vessel descending rapidly, the debris showers on the surface of the planet began to increase in both frequency and lethality, unperturbed the forces already planet side continued to wage their wars. Both the Loyalist and Traitor armies spread out and searched the ruined areas while conducting a running engagement with each other, occasionally meeting in force at bottle necks or exceptionally attractive looting areas. Early into the engagement an Ordinancer Officer was retrieve from a wreckage, aiding the Loyalist as best he could, however the area was rife with other hostile forces; both a rogue pysker and a hidden Assassin were flushed out of their hiding spots attacking indiscriminately but both were put down, a Traitor Sergeant valiantly weathered the rage of the witch before taking his head, and a Loyalist Leviathan Dreadnought wasted no time to allow the Assassin to endanger his commanders, vaporising him with a Melta Lance.

By design or fortune the Secessionist forces on the planet managed to avoid larger engagements and instead focused on evacuating their limited troops, while at the same time attempting to fire the many orbital defense weapons at the incoming debris creating small pockets of protected areas, covering their own movements as well all other forces, including the fleeing Knight Houses. Unwilling to commit their own resources to such actions of mutual safety the Imperial forces continued to battle each other in ever increasing dangerous conditions, quickly finding themselves cut off from orbital retrieval, and unable to secure lucrative finds. One such instance proved devastating as a Loyalist Mechanicus search party reported the securing of an STC fragment cache and requested extraction, by the time the orbital landers arrived the entire area had been leveled by an exceptionally large strike of the falling Cruiser.

The Imperial loses on the ground were devastatingly high, a crippling blow to both sides in the System and something will impact their ability to field larger standing armies for the remnants of the Campaign. The Secessionist meanwhile not only won the favor of the remaining evacuating Knights but also retrieved the vast majority of their limited armies and, thanks to their cautious approach, they too discovered a small cache of STC fragments, their retrieval vessels making a full recovery of the resources.

However the rebel forces did not fare so well in orbit.

Both Imperial fleets turned their attentions to the Secessionist vessels, launching numerous boarding parties and strike forces at the flagship Enlightened. Unable to repel so many attacks and with the rest of their small fleet occupied in recovery operations, the Grand Cruiser took crippling damage; first losing their Weapon Batteries reducing the fleets already meager fire power and then having their primary Drives knocked offline and sending it adrift, fortunately away from orbit, forcing the rest of the fleet to break off and escort their crippled vessel away from the engagement.

So while retaining the majority of their ground forces, the Secessionist forces will struggle to mobilise them in an aggressive manner for some time as emergency repairs are conducted on the flagship. Their withdrawal from the Campaign is also hampered, delaying any retreat they may have had planned.

Planetside the final impact of the Accipiter was somewhat mitigated by the amount of orbital fire poured into the segments, but the final sections of the ship were far too large to diminish and the impact effectively sterilised a full third of the planet with a molten fire storm. Huge sections of the bordering planets surface is now aflame and only the most hardened bunkers and vehicles are expected to survive any length of time. The opposite side of the planet, while peppered in the initial debris showers, did escape terminal impacts, but the ecology of the planet and its atmosphere, already damaged by previous war, is now doomed to descend into a death world; a planet which retains hundreds of relics and secrets but will prove reluctant to yield them.