Global Heresy: The Stilling of Bharteth

The Stilling of Bharteth will allow players to be involved in a world wide 30K campaign running from January through to the end of June, 2021!

Be sure to check out the 30K Crusade Facebook page for the latest information and join the community who is shaping the outcome of the story.

All of the document for the campaign can be found in the AUS30K Documents section, from the campaign supplement booklet, the advanced 30K Crusade rules and numerous print out for tracking your Crusade forces.

For the reporting of game results go to this site and enter the password Bharteth for any games of the following format; Zone Mortalis, Centurion, Frontline, Adeptus Titanicus and Battlefleet Heresy. You only need to report the winner details; their faction and allegiance plus the game format you played.

For those who are playing the Bharteth specific scenarios and need to report on Gang Influece use the password Gang, while reports for the Psychic Beacon use the password Beacon. For both of these reports you report your own results, not just the winner. So if both players scored points, they both need to report with their Faction and Allegiance and then either the House you want to gain influence with or the number of Beacon points scored.

If you have any issues with the reporting site, please contact us through the AUS30K Facebook page.

To accurately document how this desperate conflict started is difficult to pinpoint. Was it the arrival of the Loyalist fleet in Bharteth and the landing of the first troops? Was it, like so many other wars, an event triggered by the Warmasters betrayal? Or can blame be placed at the feet of the Imperium and their first steps on the path of the Great Crusade itself?

So instead I shall declare the cause of this campaign to be the over zealous, almost ignorant, actions of the Imperial forces fighting on Enterigar III as part of the wider conflict throughout the whole Helix Cluster. I will not digress into the myriad of war zones within that Sub-sector, as I have already submitted that treatise to be filed away in the Librarian Terra. Instead let us focus on the specific actions which took place on Enterigar III that led to a portion of the Imperial forces, both those loyal to the Emperor and those serving the Warmaster, venturing into a barely navigatable warp route leading to the far flung system of Bharteth. This incident was deemed such a threat that both factions were willing to weaken their military strengths in an ongoing conflict in order to ensure it was dealt with. Whether adequate resources were given over to this task is yet to be seen, but that an effort was made by both sides is commendable in itself.

The opening waves of the Bharteth invasion have been brutal, Loyalist and Traitors both hitting the central hive hard with neither force making any concerted effort to win over the allegiance of the local Houses. However the conflict has drawn the attention of other elements as well, both Blackshields and Xenos have entered the fray trying to influence the outcome of the compliance to their own ends. The Central Hive is the primary battleground at this point with both Independent and Xenos forces making sorties into the tight corridors, raiding and testing the Imperial forces who are establishing themselves there. The Loyalist have gained a slightly stronger foothold in the depths of the city compared to the Traitors but only marginally, both Imperial factions have committed large strike forces to the area and are working hard to secure their bases of operations.

In the outer Hive things are somewhat different, the Loyalist have been denied access to this area utterly with both Traitors and Independent forces shutting down the access tunnels and creating defensive staging areas to expand their sphere of influence throughout the factories. There have been numerous rumours of Xenos scouting parties, but no worthwhile engagements have been reported by either faction as yet. The Rad Wastes are the clear domain of the Traitor forces at this point. Having landed dominating ground forces early, with perhaps even stealthed assets on the ground prior to the main fleets arrival, assisting in securing huge landing zones for further expansion attempts. The Loyalists have secured a small fortified section to the south of the main Hive structure, while under constant attack by Traitor forces they have managed to hold them off thus far.

The orbiting Forge-Moon has seen a violent start to the campaign with Traitor forces inflicting significant damage to the conclaves infrastructure contrary to the conditions of engagement outlined by the magos. And while the Loyalist and Traitor Engines currently stand at a stalemate as reports persist of a force of Xenos Engines making their way into the engagement, however no survivors have been found to indicate which race is currently leading the attack.

And so concludes the first phase of the Campaign, the forces has made their incursions and the battle lines have been drawn. I have attempted to give you a visual representation of the current standings without giving you exact figures, instead showing the dominance that each faction has over a combat Zone.

Zone Mortalis: The Loyalists gained an early lead but this has been chipped away by the other factions.

Centurion: Traitors have a strong hold of this area although the combined strength of the Loyalists and Independent forces are strong enough to contest them.

Frontline: At this point the Traitors have an overwhelming dominance of the Rad Wastes and the other Factions will need to start contesting this status before the end of the next phase or suffer.

Adeptus Titanicus: Surprisingly the Imperial forces are suffering huge loses vs an invading Xenos detachment, this could shift the course of the battle if the Imperials cannot gain a foothold on the Forge-Moon.

Battlefleet Heresy: The Independent fleets have complete dominance at this stage. Again this will need to be contested by the Imperials unless they are prepared to suffer the ramifications.

The Embrace of War

Another phase concludes with some battle zones getting a little more tightly contested and new enemies entering the fields. As the Bharteth system enters the third month of conflict the population has come to realise that this is no longer a normal uprising and increase in hostilities. The level of fighting has increased throughout the Hive and surrounds that it is now clear that Bharteh is in the cold embrace of War. With this realisation some factions have put aside old differences and banded together in order to make a stand against the Imperial incursions, although others appear to be taking sides to ensure they are in the winners good graces, believing that one way or another the Imperial will bring the world to Compliance.

The Loyalist forces have strengthened their footholds within the Hive proper, pushing higher into the Upper Hives and forming agreements with a number of the Enforcer precincts located in those zones. To help contend with the Traitors pushes and growing ground swell for maintaining independence the Emperors forces have also gained some trust with the Escher and Orlock gangs, both of whom appear to be playing both side in the conflict though. The traitors too have been seen starting to form alliances with nearly all gangs except the law enforcement, spreading their favour wide.

While dominating early, the Traitors have started losing ground to both the Loyalists and local forces who are sending out skirmishing parties from within the primary Hive. The traitors hold of the outer areas is still very solid however, with significant reinforcements being supplied by the landing zones in the Rad Wastes.

As much as the Loyalist try, they have been unable to increase their holdings in the Rad Wastes, the Traitors managing to maintain a firm hold of the primary landing zones and turning aside the multiple attempts to expand. This is giving the Warmasters forces a significant advantage in landing heavier armour which will prove crucial in the coming months of the war and when the determination of those storage areas come to a head.

Recognising the threat of allowing the moon to fall into the hands of the incumbent forces or, worse still, a marauding Xenos mercenary threat, the Imperial factions have both strengthened their presence on the Forge-moon. However this has come at a price as both parties have been reckless in their engagements, destroying significant sections of infrastructure to the point that the Mechanicum Conclave has been roused enough to retransmit their warning regarding the rules of possession. It was followed with a threat in the form of a powerful gravitonic wave pulse across a section of the moons surface which temporarily rendered the Engines immobile.

Few engagements have been reported since the commencement of the war, with local security fleets still maintaining a dominance in the void. 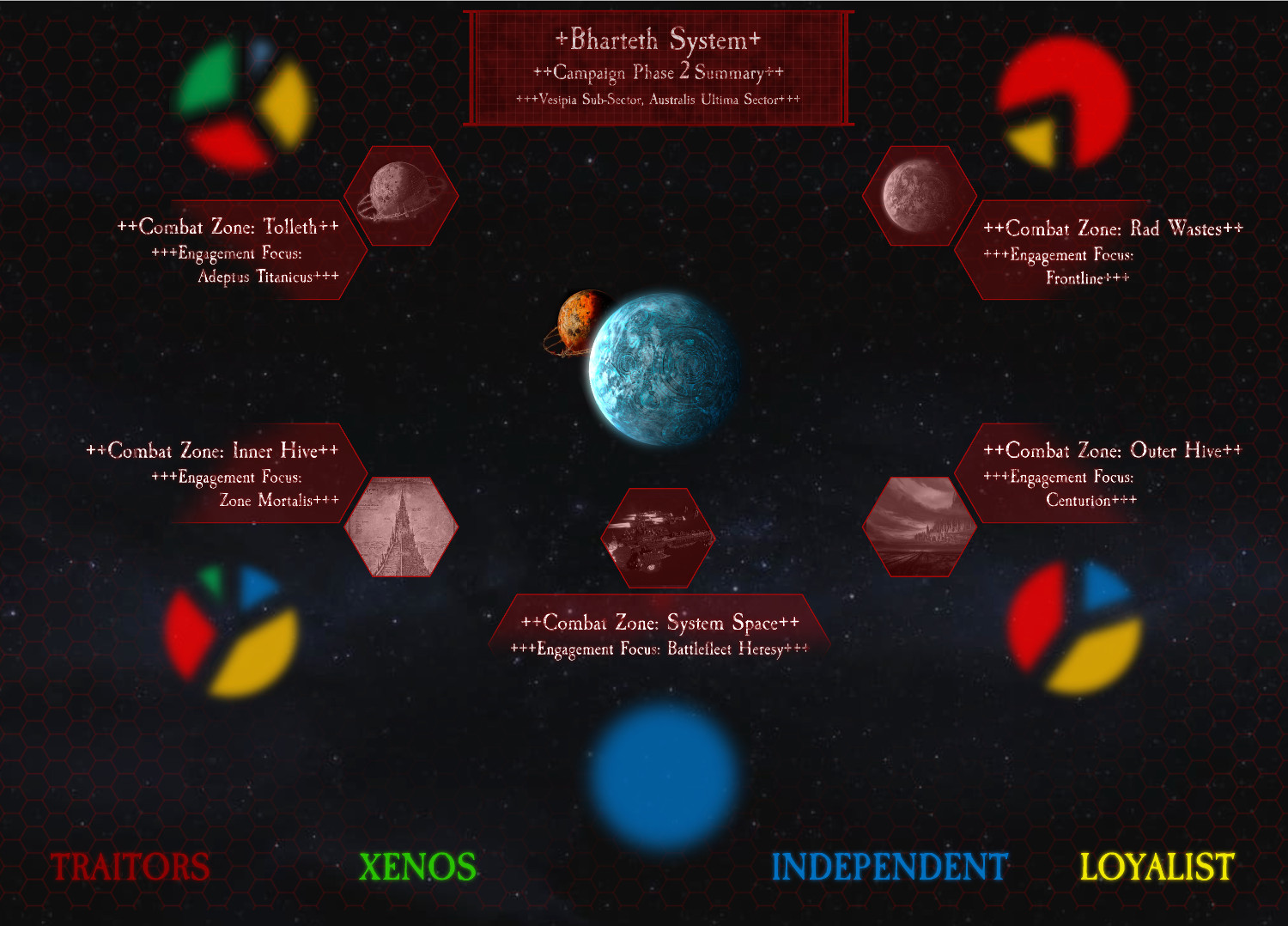