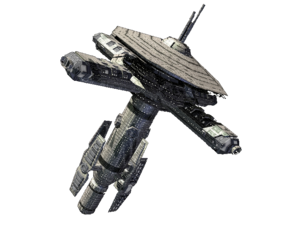 At the outer reaches of the Waacos system the fabric of reality ripped open and the vanguard of the Warmasters massive invasion fleet appeared; a wing of four Havoc class heavy destroyers in the slate grey and gold of the 707th Attack Squadron, an Imperialis Armada formation attached to the 13th Expeditionary Fleet of Primarch Fulgrim, and behind them the huntmasters to these hounds, the Phoenician, an Eclipse class battlecruiser in the dark purple and gold of the Emperors Children Legion. Battle was joined immediately as the Traitors charged headlong into the system towards Gospel Station, loosing a wave of Dreadclaws towards the station. Having emptied their deadly cargo the fleet swiftly flew on beyond the station and reentered the Warp. Swiftly after, the attacking wave of Dreadclaws slammed home into the Gospel, punching through the hull in scores of places and spilling out a cargo of death within. Emperors Children and Death guard Legionnaires, forcing their way into flight bays and hangars, exiting their Dreadclaws in a storm of fire and shell.

Throughout Gospel Station emergency alarsm sounded ‘repel boarders’, security bulkheads slammed shut and weapon cages were flung open to arm the thousands of crew, from the lowliest of dockhands to the highest of astrogator. Units from the Raven Guard and White Scars Legion rallied to meet an invander that was already within their iron walls, and soon corridors and factory levels were filled with the din of battle and the screams of the dying. Quickly, the traitors assault force smashed their way into the core of the vast and labyrinthine station, killing with controlled savagery, white and green Legionnaires creating a wall of burning promethium with their flamers to march down White Scars strongpoints that turned the air in front of them into a hurricanes of bolterfire, heedless of their punishing losses. Elsewhere, Emperors Children Legionnaires turned crew decks into blasted abattoirs, headless bodies strewn in their wake as dockhands, servitors and soldiers alike were slain without mercy by bolter and blade. At defensive choke points and at gateways to vital compartments, the loyalist legionnaires made their stand as a massive armoured behemoth clad in purple and gold thundered inexorably towards them. The eerie screams of reality being torn open echoed across the corridor as a White Scare Librarian, breaking the edict of Nikaea, used the powers of the Warp to try and repel the attackers, charging headlong into the Contemptor Dreadnaught, destroying the massive walker with melta bombs and sorcery. For the briefest moment, a glimmer of hope came to the embattled loyalists, only to die in an onslaught of shellfire. Denied even the glory of a last stand the White Scars Librarian and his brothers were torn apart in a savage crossfire. Now leaderless the Loyalist was unable to prevent the Traitors to complete their mission and soon important Mechanicum Control Panopticons within the station was a nothing more than smoldering wrecks.

Their work done, the invaders re-embarked the Dreadclaws who detached from their pray and flew to rendezvous with their mother ships. Within the myriad corridors and vaults of the great station complex itself, the din of battle died away to a dreadful and expectant silence. War has finally come to the Waacos System and the first victory belonged to the Warmaster.

Very inspiring Report and great visual effects on the Pictures!