The current population of Grox is made up largely of indentured serfs owned by either the Clans or the Imperium directly. A number of small Mechanicum covens operate on the planet to help keep the factories operational, a task which was impossible in recent decades.

Early records of Grox appear to have been expunged from all of the data repositories on Trugoy and little is actually known of the worlds history prior to it coming under the control of the clans. It is indicated that there was an industralised society on the planet prior to be being annexed and that there were existing trade arrangements with not only Trugoy but neighbouring systems such as Oteal System and even Centrumeh. While this would indicate a certain level of advanced technology, capable of inter system travel on at least a basic scale, the fact that the planet was quickly and easily conquered by the clans of Trugoy would suggest very limited military capabilities.

Once under the control of Trugoy, Grox and its industrial sectors were divided up amongst the more powerful clans who could not only assert their influence on the home world but on the system colonies as well. The added manufacturing capabilities of the planet contributed greatly to the wealth of Trugoy and assisted in its efforts to colonise Impasse, although their level of technology was the greater hurdle for that venture.

By the time the Imperium had brought Compliance to the Trugoy System, Grox had changed little. Without the knowledge to repair the vast factories which they had taken control of, the clans of Truogy simply fought each other for control of the remaining complexes. With Imperial oversight the Governor abolished the clan control and returned the world to some semblance of productivity.

Having access to both the parts to repair the factories and the skills required to bring them back online, the Mechanicum made a number of visits to the world at the request of the Sub-Sectors governor to help ensure that the System would increase its production levels in alignment with the anticipated construction of the Nestro orbital dockyards. Taking advantage of the newly awakened resource and the departure of the Imperial garrison, the Trugoy Governor ordered the worlds production quotas to be quadrupled. While the administrators, recently trained by the Mechanicum, objected and claimed that the facilities were still too fragile to be pushed to such limits, they were overruled and production increases took place immediately.

By the time of the Horus Heresy and the arrival of the retreating Loyalist fleets, the planet was a ruined and shattered husk of itself; every major manufactorum burnt out and most minor ones running at less than 10% of its intended capacity. Its atmosphere polluted to near toxic levels and the eco system beyond recovery.

ACT of Heresy: A Forgotten Legacy 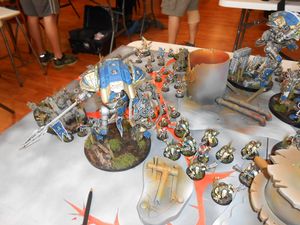 Before the conflict had truly begun the Loyalist forces had sent an advance scouting fleet into the Truogy system to source resources and potential strategic advantages which they could use in their stand against the pursuing Traitors. One such group, made up of Mechanicum forces, identified Grox as a potential candidate due to its extensive, albeit rundown, planetary industry. Early on the advance force began converting these factories to produce Heavy Weapons and ammunition to support, what was anticipated to be a long and drawn out campaign. However as the Magos delved deeper into the cogitator memories in order to retrofit the manufacturing lines it became evident that this world used to be far more than a simple civilian factory complex. Remnant scrap data were identified in a number of systems and, intrigued, the Magos Prime ordered them to be compiled and investigated even though probability calculations only indicated 0.017% chance of finding anything useful; that decision changed the path of the ensuing war. 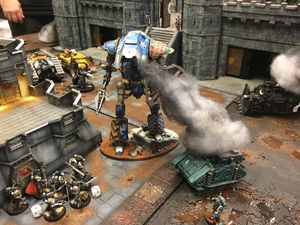 Within a day of the data being compiled and analysed an astounding discovery was made, the restored scrap data indicated the presence of a series of underground Titan Hangers from a long extinct Legio. Not only that but recovered manifests showed there to be at least one dormant Warhound still in the hangers, mothballed for repairs which were never undertaken for unknown reasons.

Notified of the find, the Loyalist command immediately reassigned a large segment of forces to be deployed on the planet in efforts to discover the Hangers entrance and to safeguard the Mechanicum's work being undertaken. This move, however, immediately brought it to the attention of the Warmasters scouts in the system preparing the way for their fleet. While they did not know what the Loyalists had found, it was obvious that they had found something of great importance to divert forces to the derelict planet, prompting them to do the same as soon as the fleet began arriving. 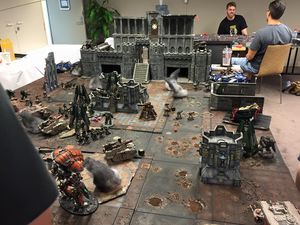 Expecting an increased token garrison, the Traitors forces deployed to the planet were all but annihilated by the resistance encountered by the entrenched Loyalist. Coupled with the earlier scouting reports of the searches that the Loyalists were undertaking, the Traitors suspected something far larger was at play then the refurbishment of war factories originally anticipated. Monitoring the area with closer scrutiny the Dark Mechanicum Magos quickly noted the movements and activities of non combative units operating in and around a specific area of the major Forge city which the defenders were using as a base of operations. Further scans and covert surveillance then revealed the systematic search being undertaken for the loyalist mechanicum and shortly after, the reasons for the search. 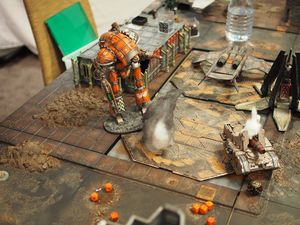 From that point forward the conflict on Grox stopped being a standard land war and something more akin to the deadly corridor warfare which was taking place on Nestro, with ground forces merely attempting to secure entrances to the underground networks to allow strike forces access. The intensity of the skirmishes increased dramatically early into the second week of the conflict when not one, but two Warhound Engines were discovered by the Loyalist. Unable to secure both chassis, however the Loyalists had retreat from the second Engine in the face of overwhelming Traitor forces, yielding it to the enemy, but not before sabotaging some of the vital systems at the reluctant advise of the accompanying Magos. With both Engines in such a state of disrepair though the fight was certainly not over and a series of search and salvage operations were launched in earnest by both factions.

As the campaign continued, a strange pattern emerged; the Loyalist forces were increasingly successful in their sorties in the underground labyrinths, finding, securing and retrieving vital components to bring their Warhound online, but the Traitors above ground were beating the defenders back at every turn, not allowing them expand their sphere of control on the planet. Concerned that the progress of the surface war was not going well and worried that their positions would soon be overrun, the Loyalists commanders made the decision to activate their Engine.

Detecting the enemies Engine power up through their orbiting auspexes, the Traitors commanders likewise had to respond to such a game changing event. While their own Warhound was far less battle ready, it was now imperative that it too Walked in order to counter the defenders powerful asset about to take to the field. And so two former Legio brethren Warhounds took to the field on opposing sides, where once they had fought side by side, now their weapons were targeting one another in aggression.

Whether it was the reluctant Machine Spirit of the Traitors Engine, or their lack of salvaged repairs compared to the Loyalist, or even a combination of the two; the engagement between the two Machine Gods was short lived, the defenders Titan striking its twin down in brilliant fury, leaving it unopposed on the surface to wreck havoc amongst its enemies, and sow carnage it did. Within days of its activation the Loyalists Warhound had hewn a path clean through the Traitors encirclement, breaking the defenders out for the first time since the campaign began and breaking the back of the Warmasters forces on Grox.