How the Sub-Sectors and Systems work 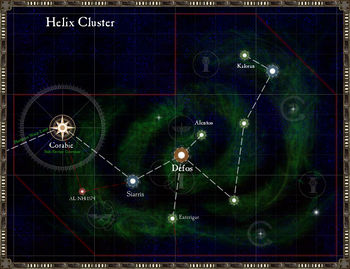 The setting is based in a region of space known as the Australis Ultima Sector, a frontier sector within the southern boundaries of the Ultima Segementum bordering the Eastern Fringe. The Sector is split into a number of Sub-Sectors with a small description of each, representing different stages of expansion during the Great Crusade, for example the Helix Cluster was only just being explored at the onset of the Heresy and so is largely feral, full of Orks and other Xenos forces along with the occasional human settlement, meanwhile Hawcinus Sub-Sector is further Coreward and so represents well established Imperial Systems with stable worlds.

Within each Sub-Sector there will be Systems made up of planets and other major locations. Like the Sub-Sector within the Sector map, each Sub-Sector can be made up of a multitude of Systems. These Systems can be used for a variety of purposes, one of which is for your local group or club to create a System in their preferred Sub-Sector and lodge the reports played within that group/club under the planets in that System, giving you a more localised game setting with your games have greater impact. These systems will become your Local System which is reserved for your groups use.

Whatever method is decided upon for the use of the Systems, each planet or other major location within the Systems can be contested locations with battles being fought over it. Each location on the System map can have a summary of its ownership listing all of the battles which have taken place so far with an Imperial date format and summaries of the forces involved and the results of the battle.

For more information on how the Battles and Campaigns impact the ownership of planets, please read this article.

Once you have created a System page you can create the individual planet pages within the System by following this tutorial.