Approx up to 1 Million worker and prisoners

Impasse was only a relatively recently colonised world in relation to the rest of the System at the time of the Crusade. Having limited technology to counter the extreme arctic conditions on the world and finding few natural resources to plunder, the clans from Trugoy only established a crude mining operation less than a century before the arrival of the Crusade Fleet. Conditions were beyond harsh and within the first few years of the colonies operation it had sustained an 85% mortality rate. Impasse quickly became a prison world of sorts where the criminals and political dissidents were sent to eke out an existence for two or three years before they eventually succumbed to the ice.

One of the key features earmarked in the initial Imperial scouting report for Impasse was the abundance of Promethium located under the planets surface. Before the Compliance action had even completed Mechanicum survey vessels translated in system and commenced and exhaustive mapping of the resources available. It was quickly determined that the volume located within the planet would be support not only a refueling way point but an entire orbital dockyard.

As the Mechanicum survey ships belonged the Retlaxi Forge World, they were given control of the establishment for the mining operations and their continued maintenance. Replacing the ramshackle arctic emergency habs erected by the clans with vastly superior hab domes, the Mechanicum seconded and upgraded the existing mining rig to ensure an immediate flow of Promethium before commencing production on another twenty-eight sites.

With the completion of the Nestro orbital dockyards the demand for the Promethium supply escalated and in response the Retlaxi Forge World sent additional covens to assist with the expansion of the mining operations, this time digging deep into the planets crust to access richer veins. With the onset of the Heresy the loyalty of the Mechanicum forces established on Impasse was cast into doubt, their home Forge World on Retlaxi having already being suspected of siding with Horus and all communications with the mining world was cut off. 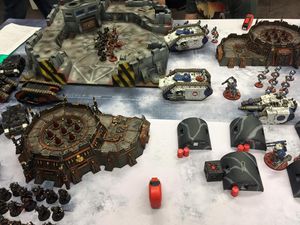 The Retlaxi Mechanicum were tasked some time ago by Horus to begin construction of an underground research laboratory in order to research a previously retrieved Xenos virus. Although originally intended for assisting with the Crusade, with the onset of the Heresy the Virus was ordered to become weaponised as it would prove a valuable addition to the Warmaster’s arsenal. As the Loyalists retreated into the Trugoy system the research center and the magos in charge of the facility fell silent, presumably to maintain their secrecy. Re-establishing contact was one of the main priorities of the Traitors advance scouting force upon entering the system, this task went unfulfilled though as all attempts at raising the facility failed. 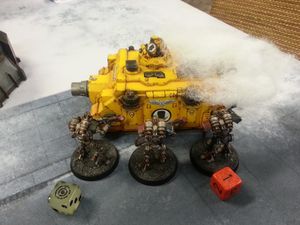 The force which controls the planet will have access to its vast Promethium supplies, invaluable to the continued execution of the campaign in this and other Systems. Unknown to the Loyalists force the Warmaster has had the Dark Mechanicum working on the weaponisation of a Virus discovered during the later crusade. With the loyalists fortifying the system, contact was cut and traitor forces needed to find out about the progress of the research. The entrance to the Lab is unremarkable, as it is covered by an ice sheet many meters thick and thus could be anywhere, and so without communication links it had to be hunted down. The loyalists at the onset of the conflict did not appear to have any knowledge of its existence and concentrated their defences around the promethium facilities thinking that the traitors will certainly be aware of the strategic importance of the large promethium supplies on Impasse and will almost certainly allocate a large force to attempt their capture. Barricades and fortifications were hastily constructed around the promethium Manufatorum facilities and export sites, with small teams of defenders scouting the ice shelves for any traitor insurgents. The facilities were not expected to be attacked directly by the traitors, so the major defences were erected within and around the facilities.

Early into the campaign the traitors exposed their true goal through a number of unfortunate loses while seeking the facilities entrance. However without the Loyalist knowledge they managed to secure access to the facility and began advancing on their target, still unclear to the Loyalist. Units of defending forces manoeuvred into the facility where possible and began conducting assaults to limit the movements of the traitors until their goal could be identified. The traitors entry to the lab, while successful, was slowed by the automated defences of the dark Mechanicum operating in the lab, the Warmaster’s Magos were unable to communicate with the cybernetica matrix and it appeared to have been affected by some sort of corrupted coding.

While the Loyalist gained a strong foothold into the facility, the Traitors appeared to be meeting more resistance then anticipated slowing them even further and endangering their plans. Thwarted at every attempt to gain access to the virus samples the traitors grew impatient and ordered the destruction of the lab and any remaining Retlaxi presence. Their aim was to secure a single sample on the way out of the death trap and the deployment of this virus even if just on Impasse!

Given the upper hand the defending forces should have been able to contain the situation, but without the true knowledge of what was taking place, their was less importance placed on preventing traitor stragglers breaking through the lines then there was on securing the facility itself and promethium plants. This error in tactics soon become clear as multiple reports of a highly lethal contagion began flooding through the vox network from units surrounding the main facility entrance. Within hours the virus had spread across the entire defensive position outside the facility and while the Traitors were defeated, the surface of the planet rapidly came under a new attack from the virus itself.