The creation of the Kildrech Crusade 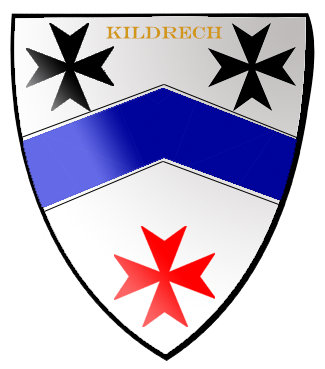 Under the command of Colonel Drache, a combined Imperial Guard force made up of the 84th Vengeance and 31st Brimlocks launch a campaign to begin reclaiming worlds lost to the Orks in the extreme edges of the Australis Ultima Sector. Targeting Kildrech as an initial insertion point for the invasion the Imperial Guard forces decimate the unprepared greenskin presence on the world, securing it within weeks and creating a beach head to stage further sorties into the surrounding system.

During cleanup operations and the securing of a base of operations, a reconnaissance force from the 31st Brimlocks discovers an abandoned fortress with Black Templar iconography. Knowing that there are Black Templar forces on campaign in the Sector Colonel Drache immediately informs the Astartes Chapter of the discovery via Astropathic comms, thinking that an active Templar Keep would be beneficial for the defence of their own base of operations. The communique is acknowledged and within weeks two thunderhawks arrive, delivering a contingent of Marines led by Castellan Illianne Pertru to reclaim and activate their slumbering fortress. Whilst an excellent commander, Illiane's latest Crusade met with the loss of more than 90% of his force, his assignment to Kildrech was intended as a ‘soft’ mission to rebuild the commanders confidence.

No more than three days later, the Orks forces launch a counter attack, catching the Imperial forces completely unprepared and causing huge casualties amongst the scattered Guard units. Pertru immediately reports the situation to the High Marshal and prepares the fortresses defenses. Rallying to the Templar Keep, the remaining Guard forces form a defensive perimeter around the ancient citadel using it as a solid backing to their defence. The Templars, whilst few in number, within the Keep spread themselves amongst the Imperial lines, lending superior force to the fight. By the time the Templar Techmarine manages to coax the Keeps Machine Spirit into activity and bring the void shields online, the Imperial losses are huge.

Even with the mighty defenses of the Keep and their Astartes allies, the combined regiments of the Imperial Guard begin to buckle under the continuous Xenos onslaught. Weeks of sorties and defensive counter attacks reduce both Guard regiments to under quarter strength a piece and the Templars themselves have lost fully half their numbers, with no Apothecary in the Keep the loss of the gene seed is devastating. Although the greenskins took equal, if not more, losses their numbers seem unending and it would only be a matter of days before they breached the citadels defenses.

Five weeks into the siege, the Ork forces gather themselves for a final assault, committing all their reserves to the attack; the defenders brace themselves for the coming end. However, before the greenskin assault gathers any momentum, the sky splits as a Black Templar Strike Cruiser, the Crusading Star, bursts through the Ork naval armada and into the atmosphere while the rest of the Templar ships engage the Xenos in Orbit. Like flaming black rain the entire Black Templar force aboard the Crusading Star deep strikes from the crippled ship directly into the midst of the assaulting greenskins. Drop Pod after Drop Pod hammers into the midst of the Ork forces and Templar Thunderhawks carrying heavy armour descend and release their zealous payloads in hastily secured landing zones.

Seizing the opportunity the besieged Imperial Forces rally out and smash into the confused enemy forces; within hours the Xenos scourge is broken and flees.

Even as the last remaining resistance is being crushed the, now, Marshal Illiane of the newly formed Kildrech Crusade summons Colonel Drache to his forward command post. The Templar Marshal thanks the General for his sacrifice for the Emperor and grants him and all his surviving troops the honour of baring the Templar Cross upon their heraldry so that all would know of his valour. In addition Pertru grants them the ultimate honour of serving with and under the command of the Kildrech Crusade, leaving no room for doubt that the Templars had just seized control of all Imperial Guard elements. Pertru is not going to allow a repeat of the doomed Olay Crusade and is determined to fulfill the Crusade by any and all means necessary.

Bolstered by the, now, seconded Imperial Guard forces operating under the new designation of the 1st Kildrech Crusaders, the Kildrech Crusade under the command of Illiane Pertru began sweeping the world clean of the Greenskin infestation. With the Xenos forces broken at the siege of the fortress the eradication of the scattered orks was a relatively simple, albeit time consuming, one. While the Crusade forces explore and secure the planet, Pertru and his trusted brothers explore the Templar Fortress itself. Although there is evidence that previous Imperial forces may have used the bastion in campaigns centuries or even millennia past, the true revelation of the Fortresses founding gives Marshal Illiane pause for concern.

After accessing one of the secure strong rooms in the catacombs of the fortress Pertru discovers records to indicate that it was in fact built, not by the Black Templars, but by a task force (L-VII-3177) of THE Templars, the 1st Company Imperial Fists during the Great Crusade itself. The more devastating discovery is that the force of Templars and Fists became separatists during the Horus Heresy after witnessing the betrayal of brothers and the warmongering of their Primarchs. Illiane shares the discovery with his trusted command cadre and they spend some time digesting its impacts and debating the concept which is paramount in the records; the Imperial Truth.

With the securing of the Kildrech Keep and the immediate territory Marshal Illiane began turning his focus to the long term logistics of the campaign. Whilst the Imperial units under his direct control would be adequate to shield his Marines from significant losses in the short to medium terms, prolonged conflicts will be sure to deplete their frail ranks. Continued attempts to raise the Sector Templar fleet was met with silence and even communication with the wider Imperium through the Phonicas astropathic relay appeared to be unsuccessful. The local population on Kildrech itself will be able to supplement the ranks of a sort, but more importantly supply lines for munitions and Astartes reinforcements need to be established.

Worryingly recently intercepted garbled broadcasts and the monitoring of the still considerable but cowed Ork naval fleet movement showed that there was a serious incident occurring in that system. Unwilling to allow his supply lines to be endangered Illiane orders a portion of the Crusade fleet to pursue the Xenos into the Phonicas system and ensure that communication are re-established and supplies procured.... by any means.

Archival Records of the Phonicas Campaign