Mustering for the Galahad

The Scions, also known as the Knights of Dawn, are a sub group of the Order from which the first legions warriors of Caliban are recruited. Compromising of many recruits from the different brotherhood sub-sections that make up the Order, the Scions were banded together to form an explorator fleet with the aim to retrieve and secure any technology deemed useful, xenos or not. At any cost.

Led by Preator Davian Locke, new to his command, Lord Locke was untested in such a high command before the Oteal system, he has since come into his own and is now referred commonly as the ‘Red Angel of Dawn’. This is reference to his prowess in martial skill but also his determination to be in the thick of the fighting, alongside his most trusted Knight Paladins, clad in the Armour of Ancients, forged by the Calibanite Forgelords.

Imperial records first noted action of the Scions was midway through the Baylonian Insurrection taking place in the Oteal system. Under the guise of aiding the flailing loyalist forces in the Oteal system, the Scions mounted surgical strikes against the traitor forces, denying total control of the lynchpin planet of Dur-Kazit midway through the campaign. Since then Locke and his Scions have been noted across many battlefields, most notably during the Ashes of Pyre campaign where they helped systematically break down the traitor defence network and rerouted all resources away to the loyalist cause and most recently the Scions have been recorded entering the Helix Cluster where they assaulted the Galahad Ark Mechanicus and have since returned to Corabie aligning themselves with House Tharr 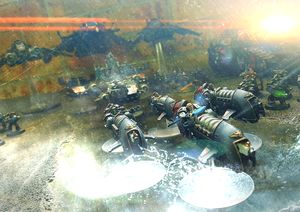 Mustering of the Ravenwing

Supplementing the Raven Guard forces during a hit and run raid on Dur-Kazit, infiltrating the traitors data-logs and stealing much needed information vital to the loyalist cause. Information regarding pre-insurrection plasma weaponry that was under research and test phase was stolen during the raid. The files were reported lost/corrupt during transmission to loyalist high command in unforeseen circumstances.

Surgical strikes on planet Uruq in which traitor militia forces were embedded were pushed back and eventually executed. It is noted that Baylonian PDF bearing the symbology of the multi-headed Kraken were seen amongst the legions ranks after the battle. Why these forces were seen together is a mystery and has been denied by both parties in following investigations. However, the ‘loss’ of the relic weapons armament captured and held by the ‘Ghosts’ has not since been seen.

As the rain beat down, Preator Locke looked out across the trenchline, his battlements prepared, he knew he had to trust the Lions communicae and follow his stratagems. He must wait. He must hold this position and most importantly, he must secure whatever is hidden in the vault to help awaken the God-Engine.

The rain intensified, becoming so heavy that visibility became next to zero, the augury arrays began hazing and crackling, their pict screens showing wild responses. As the ground turned to marsh beneath the soldiers feet, the first cracks of bolter fire split the night, flashes of light erupted from the surrounds as the first of the scions fell beneath the heavy fusilade of shells.

As the weapons batteries rolled forwards, fire erupted from their weapons systems engulfing the Alpha legion warriors, pressing them back away from the lines when a mighty ‘BOOM’ split the battle. The Hydras leviathan crashed down amidst the smoke of its mighty dreadnought drop-pod, its doors opened and instantly fire poured from the shrouded vessels interior as the leviathan unleashed its graviton cannon on the defenders causing mass devastation.

As the Alpha warriors pressed their advantage, the scions warriors drew swords and charged, "FOR THE LION, FOR THE RED ANGEL OF DAWN!” was shouted along the battleline as they left their defensive positions. As the battle lines drew to a close, bolt pistols flared and chainswords fell, a furious melee ensued with both armies suffering heavy losses. The leviathan came flying at the lines full tilt but was hit with a precision blow by a laser battery, crippling the leviathan and stopping the charge before it could crush the Scion lines.

“My Lord, extraction is complete. We have what we need” came the message through the vox.

“Good” grunted Locke “bring the reserve lines around in a flanking formation, we will move the objective away under the cloak of the armoured rush”

“Aye Lord, your will be done”

Amidst the fury of the melee Davin stood tall, his trusted knights forming a bulwark the enemy could not move, furiously defending the line against all enemy comers. As the melee was at its thickest the reserve lines broke, encircling the enemy lines and breaking the crush of the melee and firing canisters of smoke to hide the surviving units from the enemy’s fire. As the smoke cleared, only the bodies of the Alpha warriors were left amidst the mire, the Scions battle plan, although heavy in cost had worked, allowing them to remount in their rhinos, recover their dead and fall back to defend the convoy carrying what so many Scions had that day fought and died to secure. 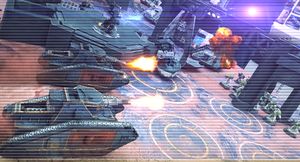 1st Legion Ironwing mobilised during the Ashes of Pyre campaign

Still weary from their close victory over the Alpha legion, the Scions of Dawn traveled in a convoy destined for the nearest space port, recent vox traffic had become all but impossible with fleet command and the only solution was to attempt to secure a vox relay to gain extraction of the objective. As night closed in on the 2nd day bright lights could be seen in the sky, like hundreds of shooting stars across the night sky, it was almost peaceful. That is, until the lookouts riding in their pintle mounts noticed something off about the ‘shooting stars’.. it appeared they were almost heading straight at them!

Before the alarm could be raised the drop pods of the yet unidentified enemies crashed down all around the convoy effectively hemming it in with nowhere to go. The first lot of fire erupted from the legionaires who were now surrounding the convoy en-masse, raining melta bombs along the convoys flanks and further hemming the Scion warriors in. The Night Lords had struck.

Preator Davin Locke drew up the armoured company, ordering all troops to disembark and tie up the ambushing Night Lords so as to protect the objective. As the troops rushed out into the night to meet the Night Lords face to face, the rhinos previously holding the troops rushed around performing flanking manoeuvres and effectively corralling the enemy strike units whilst catching them in a cross fire with the recently refitted heavy flamers. The results proved devastating as the enemy were not able to maintain combat effectiveness and were forced to withdraw or be crushed between the oncoming tactical squads.

More and more pods thumped down, this time further out, disgorging reinforcements as a rear guard for the Night Lords units, their onslaught was wearing down the Scion warriors as constantly they were being drawn from one combat to the next attempting to keep the enemy at bay and away from the objective hidden securely inside the command rhino.

Eventually the line parted, the Night Lords tactics had pulled the Scion knights outwards and opened a gap in the defensive cordon enough for their command terminators to surgically strike right into the heart of the convoy, killing and destroying all in their path. Locke knew he had to charge out of his land raider and meet this foe head on if there was any chance of surviving this night and getting the objective safely to the airport and from there to its eventual destination to aid the loyalist cause.

Turning to his second-in-command, Centurion Erasmus Pulos, Preator Locke handed him the communicae detailing the mission objective and its eventual destination, the hanger located on (insert world).

As Locke and his retinue formed up, they emerged into the night, full frontal charging the rampaging Night Lords commander and his followers, bellowing out his challenge the Red Angel of Dawn flew into the battle, his combi-bolter alight as the two squads crashed together. Channeling the Red Angel, Locke parried and riposted and was parried in turn, the two legion commanders circling, the honour of the duel being maintained by all, a furious exchange of blows were dealt to both combatants but neither could piece the others armour.

As the battle raged around them the commanders came together once more, this time for good, furiously exchanging blows, the Red Angel baited his enemy into a full lunge, allowing Locke to slip past his blade, seizing his sword arm with his left and bringing his Calibanite forged paragon blade into the opponents chest between his armour plating with his right. As the mortal blow was dealt, the Calibanite and Night Lord terminators closed into their own melee, but it was over quickly as the distraught Night Lords were still shocked at the death of their leader.

Davin Locke grabbed the chest plate of the failing commander, bringing his combat blade to bear to perform the coup de grace, sparing the Night Lord a slow death. “Any last words traitor?”

"You will never awaken the god engine, you will never make it, we will hunt you to the end of the sys-“ his last words were cut short as Locke plunged the blade deep into the neck joint.

Turning around Locke came face to face with a full squad of Night Lords marines bearing plasma guns, “Fight me you cowards!” he bellowed, but they would not rise to the challenge and brought to bear their deadly payload, unable to miss at such close range Davin Locke and his squad stood no chance, plasma fire ripped through their terminator armour as if it was paper, his retinue of trusted knights lay dead around him as Locke fell to his knees, his vital systems already starting to shut down, he raised his eyes one last time to behold the night sky, a single falling star was all he could see, a single star coming straight for his position, his hand lost its grasp on the locator beacon, it fell tumbling to the ground in-front of his killers as he drew his final breath.

The earth shook with thunderous impact of the dreadnought drop pod, streams of vented gasses surrounded the pod as its doors came crashing down, enabling the leviathan to use its extensive augmetic eyesight to pinpoint the enemy position “FOR THE RED ANGEL! FLEE BEFORE YOUR DOOM!” the leviathan bellowed as it came thundering down the rampart, its grav-cannon blast torsion crushed the plasma squad in one blow whilst its siege fist rent the nearest drop pod, scrapping it with ease.

“RALLY TO ME BROTHERS!” the leviathan boomed over its amplified speakers “HARKEN TO ME, RALLY AND AVENGE THE RED ANGEL!” a momentous roar erupted from the surviving warriors, although their liege lord was slain they would fight to their last breath to ensure the mission succeeds.

As the remaining tanks tore through the blockading drop pods the warriors remounted in their rhinos, pushing through the road block and blasting their way out of the trap, victory would be theirs this day, but at a price some may say was too high, but at least the red angels final wish was upheld and the objective was not lost.