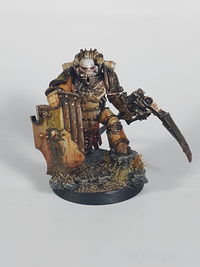 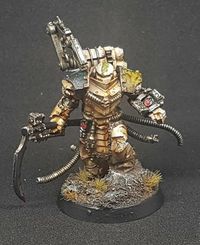 Salathiel Morvexus was a relatively unknown legionnaire until Istavaan III. Being a stark supporter of Mortarian on Barbarus, Salathiel flocked to the Primarch's side when Mortarian sided with Horus during the Heresy. At Istavaan III he was in the intial wave of traitors who would catch the loyalists by surprise within his own legion. But amongst the fighting, brother against brother, Salathiel found himself alone as the virus bombs descended on the planet. Caught in a complex maze of underground ruins, sealed from the surface, Salathiel was thought to have perished by his allies. But during the search for the remaining loyalists still on Istavaan III, a recon squad from the Death Guard uncovered Salathiel on entering an underground chamber. Salathiel was found covered in blood, surrounded by 77 dead loyalists in the chamber and the many underground passageways leading from it. All bodies were killed in hand to hand rather then from bolter fire. With Salathiel's obvious skill at killing other space marines, Mortarian was quick to promote the legionnaire and with his favour from the dark gods they now followed, Salathiel was promoted to Chaplain. Mortarian presented the newly appointed Chaplain with a Power Scythe as a sign of his position and skill in combat.

Word had spread among the legion of Salathiel's adept at killing other space marines and his reputation continued to grow in the later campaigns. Mortarian selected Salathiel for many kill mission and in his wake mayhem rained. It was due to this that Salathiel Morvexus became known as Mayhem and those marines that followed him, the Marines of Mayhem. The Marines of Mayhem were outside the normal force organisation structure and were force assigned to Mayhem based on the next mission he was assigned. As his reputation grew so did that of the Marines of Mayhem and soon many legionnaires were fighting hard to be allocated to the unit. Mayhem instigated the initiation that he had endured in the ruins of Istavaan III, in that any legionnaire that wished to be assigned to the Marines of Mayhem had first had to complete 77 confirmed kills of loyalist space marines before they could join.

Originally of Terra before being inducted into the XIV Legion just prior to the rediscovery of Mortarion, Axamal Tyranicus was quite adept at killing and he rose quickly in the ranks of the Death Guard. It was at the Battle of Gyros-Thravian against the greenskin horde, that Tyranicus was promoted by Mortarion to Delegatus, and later, following Istavaan III, with the death of his Praetor Icassus Tyllis, Tyranicus took command of the battle company. Tyranicus flourished following Istavaan III, and Mortarion enjoyed his dour demeour, which reminded him of himself. Tyranicus did not take kindly to politics and schemes, his battle tactics often blunt and brutal with a large use of heavy weapons squads followed by targeted assaults at the heart of enemy formations.

Following reports of a Salamander Legion force on the planet of Jento in the Austalis Ultima Sector, Mortarion assigned Morvexus and Tyranicus together in order to eradicate the loyalists. Thought to have been survivors of the Istavaan V massacre, the Salamanders had fled to the planet in order to restock equipment and repair their damaged ship. Unsure of their numbers or whether they had fortified any position, Mortarion surmised the combination of Tyranicus' ability to assault a dug in enemy as well as Morvexus' skill in hand to hand would work extremely well together. Morvexus was less then pleased to be assigned with a Praetor, however, he was highly impressed with Tyranicus' skill in prosecuting the attack. This allowed Morvexus to meet the Salamander Commander in hand to hand and Morvexus promptly dispatched the loyalist with a slice of his scythe.

A Techmarine during the Centrumeh Gate campaigns, Forgelord Turiel Faxus was pivotal in the discovery of the Warlord Titan on the planet Raynes, and the eventual escape from the planet. Following the campaign, Morvexus promoted Faxus to be the Forgelord of the Marines of Mayhem and Faxus set to work in getting the titan to operational status.

With Jento cleared of loyalist involvement, Morvexus and Tyranicus receive long range ship to ship communication from who they were told was Alpharius himself, to assist in accompanying an Alpha Legion task force in who were inbound to assault the Centremeh Sub-sector. Word of the discovery of a Forge World within the system and the promise of untold relics would allow Morvexus and Tyranicus to prosecute war on a much larger scale and the two commanders agreed to join the Alpha Legion.

Whilst Morvexus and Tyranicus await the reconstruction of their new weapon, reports reach them of the discovery of an ancient technology discovered in the Helix Cluster. An Ark Mechanicus has been discovered and Alpharius again requests the Death Guard's support in launching an assault into the region.