77th Grand Line Company, Previously led by Sektar Marsk, who was Slain Holding the rear Guard in the Baylonian System; Argerian Maw is the Current legion Praetor of the 77th Grand Line company.

The 77th Grand company, Makes heavy use of rad weapons and Volkite weaponry Massed infantry with supporting heavy vehicles form a main stay with the army, Allowing the forces of 77th to advance and Occupy Enemy position and Fortifications,Though seldom do they do so, the companies motto "To the next Field, till Death Claims its share" a Paraphrasing Of the Words Mortarion spoke to them upon the founding fields as the Men of the 77th Primarily come from the Plantation Fields the provided fields on Barbarus.

The men of the 77th before transforming into the Space marines of the XIV Legion, were simply folk, Farmers and fieldsman, their Resistance to deadly atmosphere of their home world being higher that their town folk brethren suited Mortarion's purpose to field a Line company of Men that were of hardy gene Stock.

The forces of the 77th Company tend towards large infantry formations supported by the legions massed Heavy Support, ranging from the legions Massed supplie of fellblades, the their massed used of sicaran and vindicators to supplicate the infantry advance. 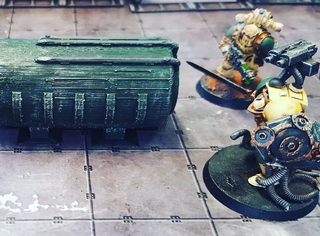 Little is known of the warrior that would come to be known as Argenian Maw prior to his ascension to the rank of Sergeant at the head of a Death Guard Breachers Squad. Just one face among the thousands who served in Mortarions legion. Octurian Sebastus as he was once known attained the rank of Sergeant following the quelling of the toxic wasteland planet ++REDACTED++, once a beautiful utopia.

Reduced to a poisonous waste from years of virus bombing, the planets atmosphere hung heavy with the taint of the biological weapons unleashed upon it. Having lost as many, if not more lives in the aftermath of the bombardment to the planets xenos inhabitants, who appeared unhindered by the destruction wrought upon their world. The commanders of the crusade fleet deemed the planet unsuitable for a war fought by the imperiums human soldiers. Surely this was a theatre within which the Death Guard could excel?!

Of the quelling itself, many of the records remain sealed. It is clear that the Death Guard made planetfall upon "", unfazed by the toxins that laced the air, and fought alongside the Galadari 137th Abhumans. The so called "Monstrous Regiment". What followed was a bitter war that won those involved fame and infamy, but that is for another recounting. It was this conflict that saw Maw rise from the faceless masses of the legion and attain the rank of Sergeant. Perhaps better he had died there on the barren wastes, like so many others.

It was not to be so. Sebastus would continue to serve Mortarion and the Legion loyally for many years, even taking part on the atrocities unleashed upon Istvaan III & V against his brother marines. Having spat on their oaths of loyalty to the emperor and the imperium, the Death Guard would carve a bloody path across the stars in their journey to Terra. Countless planets would be virus bombed into extinction and numberless lives lost. It was one such planet where Sebastus would lose everything, and emerge as something else entirely. Algonquis, a forest moon on the path to Sol, a backwater planet that would become the grave of the Imperial Fists frigate Xanthus, and Varksjold of the knights errant.

Having boarded the Xanthus leading a team of Breacher marines, Sebastus and his squad immediately set to task seeking out and destroying the ships Gellar Field generator. Hoping to prevent the ship from making a jump into the warp to escape the Death Guard frigate Barbarus' Sting, Sebastus led his men ever deeper into the labyrinthine bowels of the vessel. He could not have known that already crippled from the barrage of fire the opposing ship had unleashed, the Xanthus was begining to fall into the orbit of the planet below.

Sebastus and his boarding party made it as far as the mid deck before being discovered. By which point the lives of all on board the Xanthus, Death Guard and Imperial Fist alike were sealed. Even as the ship broke apart in the atmosphere of the once vibrant agri world now rotten ball of decay Algonquis, the Death Guard boarding party engaged the ships crew. Sebastus himself faced the Imperial Fists Captain Latham in single combat, greviously wounding him in the process. Wether or not Sebastus would have been able to land a killing blow on the captain is a matter of conjecture. For right at the height of the duel as Sebastus was certain the day was his, an unseen assailant struck.

Sebastus did not know it but the assailant was Varksjold of the Knights Errant, and this mysterious warrior would be the one to end Octurians life. Varksjold drove his great two handed blade right through Sebastus, impaling him. In that moment the ship impacted with the planet, throwing all the Astartes too the floor and killing many of the human crew. For Octurian Sebastus of the Death Guard, it was the end. Moritat Phorgal, Captain of the Barbarus' Sting would dispatch ground troops to the planet in search of Imperial Fist Survivors. Their exploits are recounted elsewhere, but it is enough to say that the Death Guard deployed to the planet, Destroyers of Graven squad led by Chaplain Murnau were succesful in their Mission to Erradicate the Imperial survivors of the crash. At the cost of their own lives. It would not be until Murnau failed to check in that Death Guard reinforcements would be sent planet side to determine the fates of the first wave. What they found shocked them.

The Xanthus had completely sunk into the muck that was the planets surface following the Death Guard Bombardment. A massive clearing surrounded by the bare stakes of huge iron oaks were all that remained to show the resting place of the Imperial Fists Frigate Xanthus and the Death Guard strike force. That, and a single body. Somehow against all odds, Sebastus had survived. Clinging to his miserable life long enough to drag himself from the sucking depths that had become the Xanthus' final resting place, what remained of Octurian Sebastus was barely recognisable as the astartes he once was. The exposed areas of his flesh had been stripped clean showing gleaming bone and glistening muscle. Most shocking of all was what protuded from the mess of gore that Sebastus' intestines had become. It was Varksjold of the Knights Errants sword.

Sebastus' remains were brought back on board the Barbarus' sting, and were almost immediately set upon by the Frigates Mechanicus Cohort. It has been said that great shrieks of torment were heard from behind the sealed doors of the Mechanicus quarters whilst Sebastus' remains were held within. The truth of this remains unknown, but one thing is certain. In the depths of that cursed place, the magos of the Dark Mechanicus had created life. Through a foul blending of arcane sorceries and Techno Heresy, Octurion Sebastus' remains had been sealed into a suit of unique Terminator Armour. Octurion Sebastus of the Death Guard was dead, the Magos proudly proclaimed. The being trapped within this armour, bears another name. Argenian Maw.

While appearing as nothing more than a scrawny youth, Death guard recruiters saw massive potential in the boy that would later become one of the legions Greatest Primus medicea.

Doe Grerian, Son of Rohdmann the Apothecary, had picked up the unnatural talent of botany and medicine from his father, Able to pick out which herbs amidst the murky poison quagmire that made up the surface to heal, and which ones to make deadly concoctions with, Though a bony youth, the apothecaries of the 14th immediately noticed the potential the boy could bring to the legion, and thus he began his induction into the newly Named "Death Guard" along with his apothecary belt filled with assorted herbs and plants.

The years during his undertaking to become a instrument of death, Grerian was exposed to the vast librariums of medicines, poisons and their uses amongst the armies of mankind, Under the tutelage of Koray Barcu, Grerian's knowledge of medicine, poison and the use of radiation, soon far surpassed that of any other legions, especially in the realm of radiology and chemotherapy.

Grerian's thirst for knowledge would find him at the forefront of battle, alongside Tactical squads in some of the harshest environments testing the mettle of the men around him and the effects the battlefields had upon the men of the 14th, Putting his knowledge of toxins to good use, with his Custom built Needle rifle - a gift from the head apothecary of the 3rd Legion, Fabius Bile, For his efforts alongside the 3rd legion in the clearing of +++ REDACTED +++ and its sister moons.

His merticulous record keeping affords him the benifit of using the perfect toxins on xenos and humans alike, building a extensive record of the best toxins to use, his belt always stocked with new and daring chemicals to use against those who's folly is to stand against the 14th, The recovery and rebuilding of Argerian Maw saw Grerian rise to the upper echelons of the Company's command as his extensive knowledge of astartes Biology saw him instrumental in the reconstruction on many of the damaged vital organs left within the host that was Argerian Maw putting him in good standing with the Mechanicum's tech priests as they rebuilt his body.

Though to say that Grerian is as brave hearted as any Legionare others describe him as a oppertunist, when situations on the battlefield start to look grim, and the chance of being cut down by the enemy, Grerian can always be seen at the front of any forces falling back, his progeniod containers full to the brim, and his surgical smock dosed in the fluids of the slain and barely living astartes unlucky enough to cross paths with Grerian on his way back to friendly lines.

Grerian takes to the field wearing a customized Cataphracti pattern terminator Suit with his Customer Needler "Atrophrius", with a surgical smock in the deep green livery of his legion, often enough though this smock tends to be drenched in the blood of friendly and fallen foes alike as Greran trials for contact poisen are always on going sees him at the Forefront of Combat.

The scouts of the 77th, arriving in the Oteal system promising support to the war masters in capturing the system, the Advance forces begin digging in and sending out advance recon sorties, supported by the legions heavy support are able to establish a beachhead for the rest of the Company to use in the system, using this beach head the forces led by Sektar Marsk are able to successfully complete their objectives, and with the passing of the synod, they were able to recover the last of their Nuclear weapons supply.