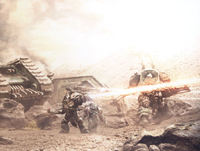 The 29th Company of the Sons of Horus Legion can trace their heritage back to the earliest years of the Great Crusade. Following the pacification of Luna, the XVI expanded their numbers rapidly at the behest of the Emperor. Forged in these days of heady glory, the 29th were at the forefront of the Great Crusade for nearly two hundred years, spreading the Emperor’s light to worlds beyond number.

As the Legion was moulded anew by the intake of recruits from Cthonia, the traditions of Terra were shrugged off and replaced with something darker and brutal. Highly flexible and fanatically loyal to their Primarch, the 29th favoured a combined arms approach to warfare, often featuring decapitation strikes utilising massed Dreadclaw assaults and rapid encirclment tactics. Their battle barge, the Heart of Cthonia, was equipped with archaic teleporter engines - of unknown provenance - powerful enough to warrant the issuing of an unusually high number of tactical dreadnought suits, ensuring that they were always at the heart of any battle they took part in, leading the 969th Expedition of the Great Crusade to victory after victory.

At the time of Isstvan III, the Captain of the 29th was Helos Perdiccas, a veteran from Terra given command many decades before the triumph at Ullanor. However, the Warmaster chose to not to include him and the vast majority of the other Terran members of the 29th in the great conspiracy that was to set the galaxy ablaze. Perdiccas died alongside billions of others on the blasted surface of Isstvan III, and with him the last link the company had to their Terran nobility was lost forever.

In the aftermath of Isstvan III, the 29th was left leaderless, and rumour spread that an outsider from another company was to be promoted to the captaincy; a source of great shame for the notoriously prideful Cthonians. When the Warmaster summoned the youthful lodge member Apophis Kantarah - only recently accepted into the Justaerin - to Lupercal’s Court, many within the company were perplexed at the possible ramifications.

Kantarah returned from the Vengeful Spirit with the fires of fanaticism burning in his eyes. The 29th had not failed the Warmaster; they had been refined to a point, and now truly were the edge of the spear. As with the rest of their Legion, they had been purged of those not worthy of serving their Primarch. Apophis Kantarah was to lead the 29th into damnation alongside his gene-father.

Now wearing the sable warplate of the Warmaster’s chosen elite, Kantarah led the 29th down the left flank of the Urgall Depression on Isstvan V, meeting the charge of the Raven Guard head on. In the wake of the battle, with 17 confirmed kills to his name, Kantarah was officially promoted to Captain of the 29th Company of the Sons of Horus Legion. As the traitors fanned out from Isstvan V, the Heart of Cthonia powered up her warp-engines, determined to set the galaxy ablaze in the name of Horus Lupercal, the true master of mankind.

It is not for nothing that we are named the greatest of our transhuman kind, my kin! We are the scions of Lupercal, the chosen praetorians of the true Emperor of Mankind! These men that face us are no longer your brothers, and were never your equals. By the end of this day their legacy shall be measured in tally markings, etched into our wargear! In the name of the Warmaster and the 29th Company, kill for the living! Kill for the dead! Lupercal! ~ Apophis Kantarah as the treachery of Isstvan V was revealed

Unique Formations of the 29th Company

- The Illuminators: A much more informal formation than the Unblinking Eye, the Illuminators are the 'first among equals' of the many Reavers present in the 29th Company. With no uniform colours or iconography, it has been difficult for Imperial historians to chronicle their exploits. Led by Jorvik the Illuminator, from whom they take their name, they are known to deploy as Despoilers or a more elite Jump Pack equipped elite assault formation.

- Ozh kal-Null: The Cthonic name given to the disparate forces led by Lodge Master Ygethmel Null. Comprised primarily of Veterans, the Ozh kal-Null are the most flexible elite of the 29th Company, deploying with equipment suited for the task at hand, whether it be a Zone Mortalis action in the heart of a burning world or a pitched battle in the dark sands of Isstvan V. 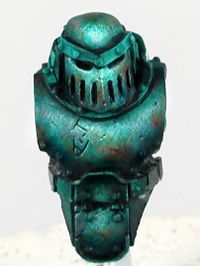 Pict capture of an unknown Legionary of the 29th Company from the Battle of Port Maw.

- Apophis Kantarah: Captain of the 29th Company, High Chieftain of the Unblinking Eye, Blademaster of the Serpent Cult, Saviour of Thanatos, Master of the Dark Heart of Cthonia. A Cthonic member of the Serpent Lodge formed in the wake of Davin, Apophis is a renowned warrior with a near unrivalled duelling record in the training pits of the Sons of Horus. An immensely talented fighter who is known to have little regard for formal protocol, Kantarah conducts war in the brutal, combined-arms approach of the Cthonic gangs. Youthful by conventional standards for Astartes holding command rank, a fierce temper burns beneath his cool exterior. A staunch proponent of the decapitation strike that his Legion is famed for, Kantarah prefers entering the battlefield via teleportation, wearing the infamous Cataphractii Primus. Trained by his former commander, Helos Perdiccas, whom he slayed on the shattered marble of Isstvan III in a show of loyalty to his Warmaster. Arrogant but difficult to predict on the field of battle, Apophis Kantarah is fanatically loyal to his Warmaster and a truly lethal commander.

- Helos Perdiccas (deceased): Former Captain of the 29th Company. A veteran dating back from the Pacification of Luna, he was promoted to leadership of the Company many decades before the Ullanor Triumph. Perdiccas was a staunch believer in the ideals of the Great Crusade and refused to be involved in the lodges, leading to his death at the hands of his student, Apophis Kantarah, in the ruins of all he held dear on Isstvan III.

- Khonsu Ptolemaios – Line Captain of the 29th Company, Chieftain of The Unblinking Eye. Second in command to Apophis Kantarah himself, Khonsu is the only Terran member of the company to have been judged worthy of continued service in the name of the Warmaster following Isstvan III. A man of smouldering ambition tempered by great loyalty, he rose to his position by virtue of his unyielding conduct on the battlefield rather than by any tactical or strategic flair. Khonsu currently commands Kantarah’s Terminator Elite, the Unblinking Eye cult of the Justaerin, when his master chooses not to take to the field of battle, although Khonsu has been known to lead many different units over his time in the Legion, showcasing his underrated flexibility as a warrior and a leader.

- Jorvik the Illuminator – Commander of the Illuminators, Reaver Attack Squad. A young Cthonian inducted shortly before the Gorro Hollowing, he was marked as an ideal legionnaire long before he first donned the power armour of the Luna Wolves. Jorvik is a loyal member of the lodge and a ferocious killer perfect for assault duties, having led the Illuminators into countless battles at the behest of Apophis Kantarah.

- Callias Khul'Haren – The 29th Company’s Master of Signal and Consul-Delegatus, Callias is the Legionary responsible for the coordination between the various elements of the company and is tasked with the management of orbital and teleportation actions. On the occasions that he deploys to the field himself, the lances of the Heart of Cthonia announce his arrival in apocalyptic fashion.

- Ygethmel Null - Lodge Master and Chaplain of the 29th Company. Served with the Word Bearers Legion for many years as part of his Chaplain training, and returned a changed man. Not fully trusted by his brethren but respected for his power and wisdom. A famous warrior in his own right, Ygethmel Null has a crucial role inspiring the Sons of Horus to darker deeds on the field of battle.

Cerastes – Named the ‘Horned Viper’ in homage to the horned serpent glyphs adorning her armour, Cerastes is an infamous Typhon Siege Tank that has been in service for over five decades. Cerastes regularly leads assaults against enemy positions, and has garnered a sinister reputation over many brutal battles.

- Zarathraxx – Zarathaxx is a Fellblade Super Heavy Tank of extreme power. One of the first of her class commissioned for the Legiones Astartes, her crew are the veterans of countless battles and the trophies of worthy foes decorate her reinforced ceramite plates. No enemy has ever managed to lay Zarathraxx low, and she is the pride of the 29th Company’s significant armoured capability.

- Black Maw - The Black Maw is the Spartan Assault Tank traditionally utilised by the Captain of the 29th Company. Now the personal transport of Apophis Kantarah himself, the venerable tank now bears the cold black and red of the Warmaster's Elite in homage to her master's reputation, with only a solitary ivory panel on either side denoting the glorious past of this vehicle as part of the Luna Wolves Legion under the name Spear of Luna.

Nice work on the profile! I look forward to reading the updates as the army progresses through the campaign and other battles!