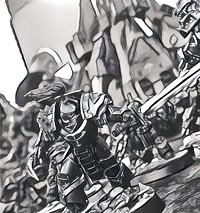 The 19th Company, Sons Of Horus is a well-recognised formation within the XVI Legion - known for their rapid offensive manoeuvre and use of assault squads during the Great Crusade under command of Captain Verulam Moy. The Company contributed to numerous noteworthy campaigns and compliances – namely Krypt, Melchior, Ullanor and Sixty Three – Nineteen.

With the death of Captain Verulam Moy on Davin’s Moon Centurion Tyrak Fore was elevated to Company Captain and assumed command of the 19th Company. Pledging their allegiance to their Primarch Horus Lupercal at the outbreak of the Heresy, the 19th Company saw splinter groups reinforcing other Sons Of Horus battlegroups and fleets following the massacre at Istvaan V.

Tyrak Fore led a detachment under command of Acrus Cain during the Campaign in Trugoy which saw them heavily involved in a series of close-quarter engagements against Loyalist forces deep within the hive world of Geigenhive and a bloody battle against a reinforces assault company of the IX Legion before tactically withdrawing following the Warmaster’s victory in the system.

We were once the Emperors Wolves, the merciless 16th. But what was once harmonious and unified becomes dissonant. Fathers will fall short of their sons and the new will overthrow old. It is the constant: a sobering revelation in the ever-changing galaxy. We are now the Wolves of the Warmaster alone, unleashed at his command - and once again we are unleashed once more. From the unseen wilderness of the cold void we will descend on our prey, find their heart and tear it out. They will feel our claws in their bellies and teeth on their throats! ~ Acrus Cain, moments before launching a Spear Tip assault into the Trugoy System

- Tyrak Fore: Once a former Catulan Reaver of the 1st Company, Tyrak Fore was elevated to Captain and given command of the 19th Company.

Cthonian Mercy – Strike Cruise Class barge given to Acrus Cain before the Seige of Geigenhive.