Several million dock workers and Imperial Naval guards. The vast majority of the population are permanent residents, multi generational indentured workers who have no hope of any other work due to their bodies defencies and inability to cope with standard gravity.

Orbiting the unstable Gas Giant Fuhn, the Nestro Shipyards are the Systems most valued commodity. The ability to refit small to medium class ships proved a valuable resource during the Great Crusade and now with the civil war erupting, an even greater bargaining chip for both sides. Unlike most other locations, neither faction wishes for these facilities to be destroyed and will be using small strike forces to gain control.

ACT of Heresy: Battles in the Void 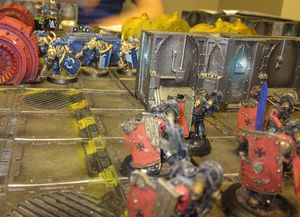 Deploying the vast majority of their forces and fleet to Trugoy to take advantage of the protection provided by the planets mighty ground based orbital defense network the Loyalists only deployed a small number of token battle forces to Nestro station to augment the already significant Naval guard stationed there. In combination with the strong belief that neither force wanted to destroy the valuable dockyards the Loyalist command felt secure in their ability to repel any boarding attempt that the Warmaster's forces may undertake in the early stages of the conflict. Unfortunately this assumption was to be proven wrong before the enemy fleet even translated into the system.

Once the Loyalist forces were on the station and their ships locked into docking bays a number of anomalies began appearing in their tactical displays. Sections which were supposedly locked down began showing open bulkheads, security systems in vital bottlenecks began powering down and pict feeds from remote flanking corridors would freeze. It became evident very quickly that the native forces were not as compliant as originally anticipated and in fact there may be even enemy cells within the thousands of staff throughout the station. Unable to track down such cells with their current manpower and time constraints the Loyalist forces instead reformed their battle plans and concentrated their own soldiers and those known to be loyal in likely breach points to counter the assaults when they came.

Their wait was not long. Before the full Traitor fleet had translated in system, a number of sleek assault ships were already en route to the Dockyards, running the gauntlet of defensive fire, which should have been significantly more intense then what it was. Although a good half dozen craft were destroyed in the initial wave more than that again managed to make inside the defensive ring and began breaching operations to gain entrance to the station itself, behind them a second wave of ships were already on approach. Amidst the klaxon wails and warning sirens, the first shots of the Rallying of Trugoy were fired in the depths of the void. 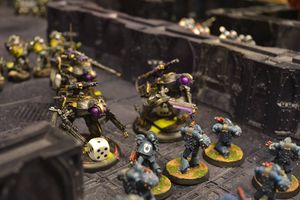 Without the full support of the Naval guard, and likely the sabotage efforts of some, the Loyalist forces were unable to completely repel the boarding attempts. The Western arm of the dockyard was only lightly defended but they were resolute and turned aside all attackers, at a heavy cost, but at the same time bought the defenders some time and morale. The Southern and Northern arms were completely untouched, the vast bulk of the enemy assaults concentrated on the Eastern arm. Two small frigate bays were the first locations to be declared lost to the enemy and the Loyalist forces began falling back, preparing to vent the entire section to the void, but before they could complete their actions, the enemy fell upon them from behind. Previously locked and secured bulkheads in the surrounding corridors have been opened and surveillance compromised, allowing multiple strike teams to flank the defenders and surround them in a crushing execution. 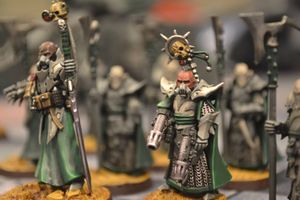 Corridor by corridor, section by section the invading force began to gain a foothold on the stations East arm, continually pushing and harassing the defenders, slipping past 'secured' bulkheads and bypassing automated defense systems. With such heavy loses in the initial phase of the boarding action the Loyalists were slow to respond, unable to gain a clear picture of what was happening and amidst all of the confusion the traitors within the ranks of the Naval guard heightened the chaos by corrupting intelligence and reports. By the sixth hour it was clear that the attackers were not going to be repelled and had formed a number of beach heads throughout the outer dock areas where they were able to bring in reinforcements to maintain the assault.

Changing tactics, the Astartes defenders issued a fall back decree for all forces, the Legion would regroup in a number of bottleneck corridors and the Naval Guard would form up behind them to provide a cover support role in the linked corridors and bays. The invaders hesitated momentarily, unsure of what was happening, but quickly recovered and began to strike forward hard and fast towards the rallying point, clearly being fed the tactic information from informants within the Naval personnel. Anticipating such a leak in their ranks, the Loyalist forces had quickly severed communication with their Naval 'allies' as soon as they had commenced the regroup, instead of rallying at the bottleneck the Astartes never appeared, leaving the Naval forces to take the brunt of the Traitors head long charge. 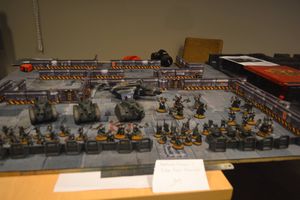 Expecting to meet a partially formed Astartes defense line the attacking marines and supporting militia punched through the bottleneck and crashed onto the Naval positions eager to break the last line of defenders, the vox became congested with harsh victory calls and jubilant slaughter. By the time the Traitors vox communications cleared enough for the warning calls to be heard it was too late. The defending Marines had broken off from their fallback paths towards the rallying point and had instead flared outwards towards the outer sections of the dockyards arm, allowing the Attackers forces to stream along the central corridors unmolested. Any straggling units or scouting marines were quickly and quietly eliminated as the defenders circles back around the main force and commenced their own attack.

Striking at both the weakly defending breaching points and the over confident assault force the Loyalist cut the Traitors in two and isolated them. Hoping that this would create enough disruption for them to eliminate both forces, the defenders had not anticipated the sheer amount of traitors amongst the Naval crew. While the breaching points were completely retaken, the ambush at the rallying point failed to deliver the killing blow after a full third of the Naval defensive position turned their weapons against their comrades in support of the Warmaster's attack. Loyalist Astartes from the remaining three arms by this time had created a second line of defense part way into the Eastern Arm, but unable to completely strip the other arms of defenders for fear of other boarding actions they were unable to launch a counter assault, leaving their comrades isolated at the other end of the arm and the traitors in firm control of several vital systems and weapons arrays.

With little options left open to them the isolated Loyalist began a fighting retreat to one of their docked Light Cruisers, the Pacificus; their plan to board the Cruiser and redock on one of the other arms and rejoin the fight again. Knowing that the moment they undocked the Cruiser the Traitors, now in control of some of the defense weapons, would open fire and destroy the slow moving vessel, a suicide force volunteered to remain behind, intending to strike at the control center and disable the weapons momentarily to allow their comrades to escape. No longer receiving the vital leaked intelligence that the Traitors were so reliant upon during the initial boarding action, they were left blind to the Loyalist maneuver and unable to predict the assault on the weapons room or the departure of the Cruiser. Unwilling to let their prey escape, multiple groups of Traitor Astartes boarded two similarly docked ships intending to pursue, only to have their vessels torn apart by the Pacificus's departing guns.

While the plan worked and the Cruiser powered its way towards friendly held docking ports, the cost was sever. Not only had a vast section of the defending force been eliminated, but destruction of the pursuing vessels at such close proximity to the station created a cascading destructive wave which began tearing the East Arm apart, threatening to distablise the entire stations orbit. Unwilling to allow Nestro to be dragged into the death embrace of Fuhn's gravity well, the Station commander ordered the jettisoning of the entire Eastern Arm..... complete with the defending forces aboard.