With the coming of the Heresy less than two decades after its Compliance, Omega Ceilia is a far from stable system. Resentment at the dissolution of the Federation is rife among the populace, Nerva, in particular, has a level of unrest which is bordering on open revolt. Forced to increase the production output of the planets industries at the order of the Mechanicum administrator on the Belt, but not able to retain any of it to assist in the worlds rebuilding efforts after Compliance, Nerva has steadily slipped further and further into dissent and disrepair.

The Demeter Belt itself went dark a few years ago, rumours of the factions within the Conclave staging a coup have started spreading and reports of malfunctioning experiments running rampant through section of the orbital have filtered through to the Imperial Administration. Unwilling to anger the red priests for fear that they would recall their Skitarii and remaining Titans the Governor has remained silent.

Both Oatov and Phthalia though remain largely unaffected. Without the pressures of the Mechanicum levied against their resources, the planets have been permitted to continue as they were before the Compliance. While there is anger at the loss of the Federation, the people have seen little degradation in their quality of life. Without interruption, perhaps in a decade or two this would change; on Phthalia, new Hive cities are being constructed ahead of the anticipated flood of Imperial migrants and on Oatov, large scale lumber factories are taking longer to establish then anticipated due to the phenomenal speed in which the tree regrow. Instead, astropathic warnings have been received advising of multiple fleets en route to Omega Ceilia, both Loyalist and Traitor. The Belt, its resource and experiments coupled with the presence of multiple Titan Legios on Nerva make the system a prime target for both forces. Should one gain dominance and fortify the system it would become a bastion for their war efforts in the Sector.

The sky of Nerva split open above St.Seb as the first of the Warmasters drop ships broke through the orbital defences. For two hours a rain of steel feel throughout the district, both intact ships and pods intermingled with the fiery debris of those hit by ground based guns. While lacking the advanced targeting cogitators of fortress worlds, the sheer density of the drop assault made it difficult not to hit something.

Loyalist Astartes backed by a huge display of Mechanicum strength from the Belt moved to intercept the growing ground forces of the Traitors, but they were stretched thin, unable to predict where the planet fall would be. Rerouting outlying garrison the defenders quickly rallied and repelled the initial attack, striking at the Traitors flanks while attempting to push them further back. However once the battle was engaged, the shifting lines began to slow and form a picture of the landing zone and the targets. The Warmasters fleet had successfully punched through to form a large ring between the Hab zone and the city sized Promethium refinery. Once the first wave of the ground forces were engaged, the second wave began to descend, this time on far larger ships; the Engines of the Legios would walk.

In response the Mechanicum authorised the activation of five maniples, almost instantly long range firepower began to pour down onto the Traitor lines and deep into their intended landing zone for their own Titans. But the lumbering drop ships were resilient and protected by dozens of escorts all more than willing to sacrifice themselves for the cause or their gods. Soon enough the crackle of void shields flickered on and return fire began in earnest. Caught in the midst of brawling demi-gods the ground war turned into a bloodbath as the Engines waded through flesh and armour alike to get at their true targets and to begin claiming Engine Kills.

The engagement continued though it became obvious that time was not going to favour the Warmasters forces. Reinforcements had been severed by the arrival of more Loyalist ships from the Belt, forcing the Traitors fleet away from Nerva’s near orbit, isolating their troops already deployed. Nearly four hours after the first orbital insertion even more garrisoned reserves had been mobilised and had joined the fray, hammering at the invaders lines from all sides. Without a solid defence at their backs the attacking Titans were forced to divert some of their engines to cover their flank and rear, while the Loyalist Legios focused their attack, driving them back into their own forces once more. By the sixth hour it was done. Encircled and cut off the Traitors forces were bled and battered insistently, their lines steadily contracting as their losses mounted while the Loyalist were able to replace fatigued and wounded units with fresh reserves being drawn up from the surrounding areas. The opening volleys of the Omega Ceilia Conflict had been fired and the Loyalist had held strong.

Rallying their remaining naval forces the Warmasters fleet redoubled their efforts to reclaim their orbital beach head, pushing aside the Loyalist defences once more and recommencing the ground war with unabated fury. Anticipating a renewed campaign against St.Seb and the promethium refinery sector, the defenders braced themselves for an assault which, at first, did not come. Instead the semi-autonomous district of HUB07715 (#07715) came under a concentrated invasion even larger than the original attack on St.Seb, now suspected to have been a diversionary ploy. Having originally broken away from the Imperium under the tyrannical leadership of, the now late, Andreius Holyson #07715 was woefully under garrisoned for the assault. Initial pushes by the Traitor forces not only overran the major military emplacements of #07715 itself but also integral installations in the surrounding Badlands.

The Orbital Uplinks located to the south east of #07715 were the first to fall completely to the Warmaster. With those sites under firm Traitor control, the orbiting fleet was able to better secure their own position and deliver more troops to the surface to continue the push northward. These forces continued to add weight to the invasion of the Hub itself as well as a secondary target of the Rosebank Docks, a massive array of ground based space docks used for massed off world trade containing billions of tons of cargo.

Partway between the Hub and St.Seb a tertiary attack was launched against the region known as the Desolate Slopes, its purpose initially unclear as the area contained no valuable installations or military assets, until the Loyalist tactical command realised that any reinforcements that were reassigned to either St.Seb or the Hub would weaken this third front and open themselves to flank attacks. Without actively engaging the forces, the Traitors had tied up dozens of reserve units, now stuck in no man’s land, unable to engage in either of the two major battle zones for fear of reprisal counterattacks from another.

Within hours a series of similarly small probing attacks were launched in areas to the south of St.Seb, their intention most likely to tie up similar reinforcement units like on the Desolate Slopes, but the defenders had already predicted such a tactic and these incursions were met with a robust attack as soon as landfall was made. As these smaller skirmishes were resolved the long awaited second assault against St.Seb commenced, with devastating failure. Against a prepared and well-fortified enemy, the attack was risky to begin with, even with scattered forces still remaining although largely routed. To do so when the attempts to sever reinforcements like those at Desolate Slopes had failed was fool hardy, but the Traitor command appeared committed to their actions. The renewed assault caused atrocious loses on both sides as well as immense collateral damage, but there was little threat of the invaders gaining any significant foothold like in the Southern Badlands. To assist the vain attempt in taking the refinery it appears that the traitors may have even redirected some incoming forces from their original target landing zone of the Orbital Uplinks across to the St.Seb theatre, some were shot down en route, and the others which made the journey did not change the final outcome of a solid Loyalist victory in the area. It did however significantly hurt the Traitors efforts in the south.

While lightly defended initially due to political wrangling, the chaos of the invasion and without the steel hand of its former tyrant, the Hub was quickly pressured into allowing Loyal Imperial forces to lead the counter attack. Without the full complement of reinforcements, the attackers were forced to consolidate their earlier holdings and conduct a fighting withdrawal of their more recent acquisitions north and west of the Hub. The counter assault successfully dislodge many of the Traitor occupation forces in those areas, but it was in no way a victory, in fact the further south the engagements were, the more in favour they were to the attackers.

As the main invasion burned out, the lay of the land was far from favourable for the defenders like that at St.Seb. Dozens of districts within #07715 lay under Traitor control and dozens more had been reduced to urban death zones with no clear dominance. The Docks and the outer districts too were all contested with no clear faction having control, except the southern zones which became more and more the Traitors territory. The source of their stranglehold, the Orbital Uplinks, had come under a surgical strike by a combined Loyalist force but had failed to wrest control back, only securing a number of key facilities.

With the number of forces on the ground and the installations under Traitor control, it was now largely irrelevant whether the Loyalists could dislodge the orbiting fleet again, the war for Nerva had turned into one on the ground, a war of attrition and occupation. 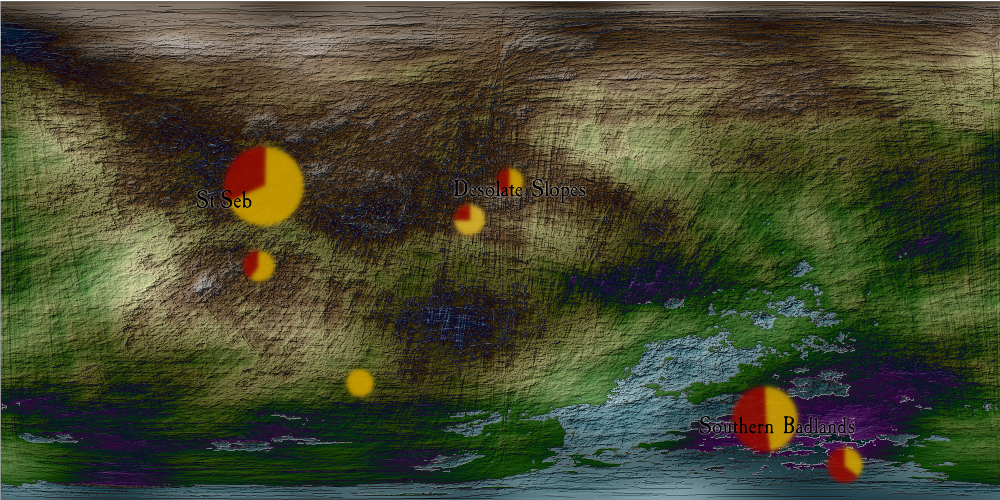