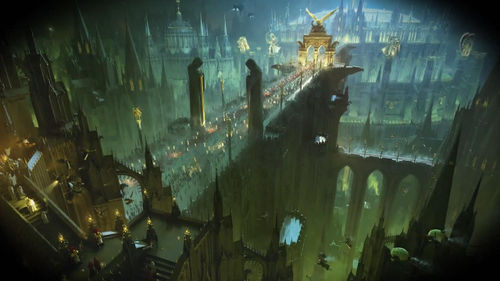 The single most important sector on the planet, the seat of Imperial authority and the traditional ruling palace for the aristricratic ruling class for centuries; the Governors Palace houses not only the ruling family, but armies of servants, staff, military, endentured serfs and workers. A small city unto itself, the Palace represented the seat the of rule for the entire planet before Compliance and now is the figurehead of the entire Sub-Sector!

Nearly every major district in the city sprawl has some form of redundancy within the palace complex, making it a wholly self sufficient facility capable of withstanding years of siege and hardships.

Global: While a faction has this location secured, all friendly armies gain a single reroll for use with Leadership/Morale tests.

Local: All units belonging to the faction which controls this location gain the Fearless special rule while within their deployment zone or the Stubborn special rule when outside of it.