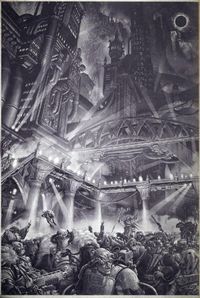 Commonly known as 'Old Hab', Hab District 1 was the original Habitat designation for the city, located closer to the heavy industrial zones than any of the subsequent Habs it quickly became the roughest. Wedged between the pollutants of the Manufactorum, the pulsing radiation of the Vox Relay Node and deathly silence of the Sub-Crypts it is certainly not the most glamorous of the habitats, but compared to many Hive worlds, still quite comfortable standards.

The population of this district would be crucial to any force wanting to continue the staggering production output of Savage, it contains the skilled labor and while they are viewed as 'common' they are still integral to the smooth running of the entire planet.

Global: While a faction has both this location and the Agri Plots secured they gain an additional +2 SVP per Turn.

Local: If this location is a Faction HQ it is immune to any Food Riots as the faction ensures that there is enough food supplies entering the area for both their forces and the local civilian population.