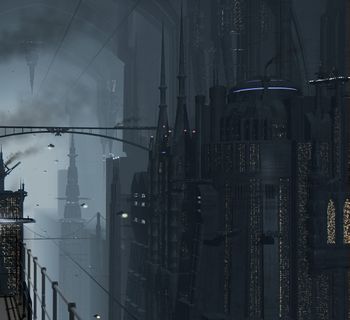 With such an extensive array of manufacturing and transiting occurring in and around the city, the capital has an equally extensive Vox Realy network scattered throughout the Sectors. However due to the immensity of it all, it became apparent that a central relay node needed to be created to handle the colossal pressure put on the network. Located deep within one of the hab districts the relay nod quickly grew as the city expanded and with the onset of Sub-Sector Governorship, rapidly commandeered the surrounding areas.

Its strategic importance cannot be underestimated as information and intelligence is key to waging war.

Global: All armies of the faction which has secured this location gain +1 to their Steal the Initiative rolls due to the vast communications network they have at their dispossal.

Local: All units belonging to the faction which controls this location may reroll all failed Reserve and Outflank rolls in addition to being able to reroll the scatter die for Deep Striking units (not the distance just the scatter die!).