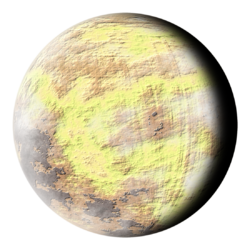 Withdrawing from the Dilari Wastelands early, foreseeing their defeat in that area, the Loyalists instead regrouped and made an early sprint for an area which had caught their attention; The Sultor Depression is a deep tract of land within the Corabie wastes which is theorised to have been a large impact site millennia ago. It may well have been the impact which caused the rapid and devastating climate alterations which the planet experienced at one point, eradicating the once verdant landscape.

The Sultor is renowned as a treasure hunters graveyard. Rumors abound of mysterious facilities buried beneath the sands and even claims that there is an entire subterranean city harboring the original inhabitants of the world.

Many expeditions have been sent out but few ever return with anything more then some trinket piece of archeotech which now adorns a rich nobles trophy room. The strategic value of the Depression however is certainly not a myth. The existing military infrastructure established by various warlords, previously sponsored by Oraldis Hive, will prove useful in securing the area which in turn will provide an invaluable site for a larger military facility. Once which would assist in securing a huge stretch of the planet and provide ground based orbital defenses.

332.010.M31 Entering the Depression from the South, the Loyalists capitalised on their early arrival and drove into the Depression from two separate areas securing both the Itery Research center to the South East and the Porwas Fuel depots slightly further to the West. While both areas will prove valuable in the coming campaign, the ability to push North as fast as possible and begin securing the center of the Depression will be utmost.

Meanwhile the Traitors, utilising their recently activated airfields, made a daring drop assault against the Migarl Warlord in the West, completely and utterly overrunning his Citadel and securing it for their own foot hold deep into the Sultor. While it slowed their initial invasion of the area it has given the Traitors a strategic advantage being deep into the territory inside a fortified zone.

523.010.M31 While the Loyalists made a strong push early into the campaign phase they appeared to suffer from the lack of air support and only slowly moved north while the other faction rapidly spread out from the fortified locations. This may have been a ruse however as towards the closing stages of the second phase the Loyalist revealed that they had been moving significant Titan and Knight forces into position for a strong northern assault.

The Traitors followed their previous pattern of securing a base of operations, spreading their influence to surrounding territories and moving to another area to repeat. This tactic paid off in previous stages of the campaign it repeated its effectiveness again here, however their forces may have become stretched thin with the advent of an unforeseen large scale engagement in the closing days of the phase.

The House Tharr forces likewise mirrored this tactic in the east, fortifying their position after a Traitor attack revealed that the citadel the Tharr forces were using as a base was actually the bastion for relic STC fragment buried beneath the sands. Another Traitors assault was beaten back by the Tharr forces as they slowly spread, securing the mountains in the east.

Whether it was a predetermined timing or the Traitors moving on the Central Wastes Citadel which triggered it, the Loyalist surprised both invading factions in the closing days of the phase by launching a titanic ground invasion from the South. How they managed to move such huge forces undetected soon became apparent when a strong contingent of Eldar Knights and Titans emerged from one of their hidden webway portals amidst ruins largely buried in the sands.

Pushing North with fury the Loyalist first secured the ruins for the Eldar allies and then the neighboring Dilgar mining and rail yard all the while hammering the Tharr forces emerging from the abandoned air base they were using as a staging point. The traitors were not immune from the assault either as the Eldar backed by House Hawkshroud stormed towards the Citadel. In response the Tharr forces split, pushing a large force of Super Heavy tanks and a full maniple south to stave off the Loyalist spearhead and while they were partially succesful, it was done so at great expense, with no less then 7 Engine kills between both forces.

The Traitors, already stretched to their limits, instead backed away from the engagement and attempted to preserve their forces. Firing deterrent shots in an attempt to sway the enemies from engaging, but their accuracy was lacking with multiple vortex missiles being launched, most landing harmlessly in the sands. Time however favoured them and the assault pettered out with the enemy at their, literal, gates but the Citadel still secure.