It had been less than a day since Myrmidon Lord Diomedax had boarded Dogon Station and already he had fought two brutal engagements with hostile Astartes forces. In the first, he had repulsed an assault by the hated Iron Warriors, inflicting heavy losses against the traitorous curs. The second had seen his forces sorely pressed, holding vital supply caches against a Death Guard kill-team. It had ultimately resulted in a stalemate with neither force able to drive the other off entirely but, Diomedax himself had suffered injury at the hands of the Death Guard commander and been forced to retreat from the field. Despite his experience on hundreds of battlefields this had left him shaken - the Legiones Astartes were truly a terrible foe, unlike any other he had faced. He would need to redeem himself and only by demonstrating unbreakable resolve could he atone. Fortunately he would have the opportunity to do so...

A prime target had been identified, a sizable stockpile of war machines - all under maintenance, stripped of vital parts or otherwise inoperable but... with the blessing of the Omnissiah they could be made to fight again. This was the chance they had been searching for, an opportunity to repay the betrayal and make a difference in the wider war. Although of little use to his Taghmata, these assets could turn the tide on other worlds. The primary objective, most of all. A mighty Fellblade super-heavy tank - fresh from the forges, the bare ceramite and plasteel of its hull yet to be adorned with the colours and iconography of any legion.

His Lord, Archmagos Myrmidax Agamon, had remained aboard the flagship in the outer reaches of the system, not willing to risk his few remaining ships by approaching too close to Dogon Station - no Mechanicum reinforcements could be expected. However, Diomedax would not fight alone this day. Contact had been made with a Space Wolf strike team under the command of Wolf Lord Kurgoth and they would strike at the traitors together.

The Iron Warriors and Death Guard were no fools. They knew the value of these machines and would protect them accordingly. They had deployed their heavy weapons in pairs all along the northern perimeter of the main service bay - the lines of sight were poor due to the abundance of armoured vehicles resting in the bay but they were positioned well nonetheless. These weapons teams were supported by three counter-assault units, one on the western edge of the combat zone, one in the centre and one in the east. Thus were their forces evenly distributed and ready to repulse an attack anywhere across the line.

Expecting such a strategy, the loyalist forces determined to concentrate their attack on the centre - here the Fellblade lay and here the axe would fall. Kurgath and Diomedax would lead this primary assault together. As the traitor assault teams on the flanks collapsed towards the service bay to repel the main thrust, Thallaxii would advance rapidly along both flanks and catch the heavy weapons teams in the rear unawares - such was the loyalist plan of attack.

As the first shots were fired it became obvious to Diomedax that the traitors had deployed almost as predicted. They were still well placed however - access corridors linked the outer tunnels to the service bay on both flanks. This would mean that the traitors could wait until the last possible moment before committing their forces - the flanking maneuver with the Thallaxii could not succeed until the assault teams were out of the way.

Even as Diomedax processed this, the Wolves of Fenris surged forward, leaping pipework and dashing from cover to cover. Return fire was fierce but hampered by the tight confines of the station and only a few shouts of pain and anger emerged from the Wolves.

After only a few minutes it must have been clear to the traitor commanders that the battle would be fought and decided around the Fellblade. The Death Guard force was led by a Legion Champion - the very same that had wounded Diomedax previously! He led the counter-assault team in the centre and advanced implacably through the lines of dormant Rhino transports with his Grave Warden bodyguards.

Soon, the intensity of combat in a Zone Mortalis class environment began to show. The Wolves pushing through the main service bay had taken losses and were largely pinned, with only those clad in impenetrable Cataphractii plate able to continue the advance. The traitors had fared worse however. Continuous harassing fire from the Thallaxii had left the traitors unable to both strike at the wolves and remain in cover - true to form, many had chosen spite over safety and had been felled by Lightning Gun and Photon Thruster.

As the battle in the centre reached its climax, the other counter-assault teams moved in to support the Death Guard Champion and his Grave Wardens, leaving the flanks open... Using their jet packs to full advantage the Thallaxii, joined (at a somewhat more lumbering pace) by Diomedax, pressed their advantage and began raining fire upon the traitor rearguard.

In the shadow of the mighty Fellblade, Wolf Lord Kurgoth and his Terminator bodyguard crushed the life first from the Iron Warriors assault team on the left flank and then the Death Guard on the right.

With the rest of the traitor force utterly annihilated, Lord Kurgoth challenged the Death Guard Champion to single combat and after a brief struggle ended his life with a single mighty swing of his axe. 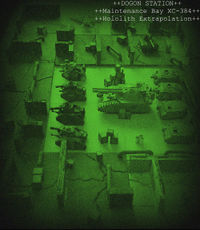 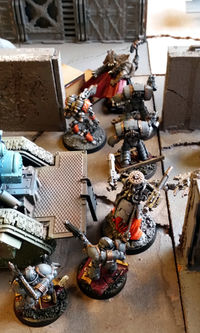 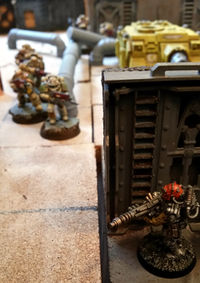