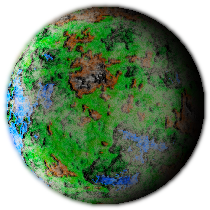 Following the previous engagement, both sides were keen to draw the campaign on Talasa Prime to a swift conclusion. The Iron Hands simply did not have the resources to execute an extended campaign, therefore, it was in their interest to confront the World Eaters in one decisive battle. As for the World Eaters, when Angron released his dogs of war, his orders were clear - "chase down the enemy and return in haste". As a result, when long range scanners detected the Iron Hands forming up for a massed assault, the World Eaters were more than happy to meet them and end this little distraction once and for all. However, this battle would not simply be a marine on marine action. The planet of Talasa Prime was home to the Knight Houses of Navaros and Borgius. Bitter rivalry had existed between these two households, dating back over several millennium. The recent arrival of two feuding Legions, was just the excuse each Knight Warlord required. Sides were chosen and knights were dispatched to assist their respective "brother in arms".

If one of the players won the last battle outright, an additional 250 pts can be spent on bolstering your force. Additionally, players are randomly allocated an Imperial Knight to fight on their side. The primary objective for this battle is to destroy the enemy, players receive 1 Victory Point for each enemy unit completely destroyed. Secondary objectives include Slay the Warlord, First Blood and Linebreaker. Mission special rules include, Night Fighting and Reserves (if you have acquired this ability from Mission 1). The mission uses a variable game length (pp 133 of the main rule book).

This battle was fought on a 12ft by 6ft table.

The World Eaters won the roll to choose table sides and decided to deploy down the right hand side of the table. They had a strong infantry force in the centre, supported by the Knight Magaera.

The World Eater Falchion deployed on the high ground on the far left with an excellent line of sight across most of the battlefield.

Directly opposite the Falchion, the Iron Hands deployed a strong armoured gun line, plus a couple of Rapier Teams.

The opening moves saw the World Eater infantry beginning their long tab across the battlefield (fortunately, the Mechanicum Temple was providing good cover against the enemy Knight).

The World Eater Falchion selected the Knight Paladin as it's first target, stripping it of a hull point. In turn, the Knight did the same to the Vindicator to it's front.

Accurate shooting from the Sicaran and Spartan, took 2 hull points off one of the Iron Hands' Contemptors.

The World Eaters continue to advance aggressively, with an Iron Hands Dreadnought being completely destroyed and a hull point taken off the Cerberus.

The Cerberus fires back at the Spartan, however the shot pings off it's AV14 armour.

The Iron Hands' armoured gun line, pumped round after round into the Falchion on the hill.

On turn 3, the Iron Hands tenaciousness paid off, as a penetrating hit roll of 7 on the damage chart resulted in the Falchion going booooom!!!!

The killer shot came from the Predator armoured with the Heavy Conversion Beamer (this is a seriously dangerous weapon against super heavies).

The Knight Magaera begins to enter charge range on the Cerberus, its Ionic Flare Shield protecting its frontal arc.

The Spartan swings to the left of the temple, supported by the Breachers and Destroyers.

Shots from the Rapier Battery....

At this point in the battle, the World Eaters' left flank had almost collapsed.

The Caestus Assault Ram arrived this turn and fired at the Knight Magaera.

The Knight Magaera was just about to charge, when it was hit by the Magna-melta.

As the Ionic Flare Shield was positioned to the front, the super heated blast scored a penetrating and it also went boooom!!!

The Iron Hands armour started to roll up the flank.

To add insult to injury, the Predator Strike Squadron managed to take out the World Eaters' Spartan.

The only saving grace was that Kharn and his Red Butchers were able to exit the Spartan without sustaining a wound. Apart from this, the World Eaters were quickly paddling up shit creek without a paddle

The World Eaters' heavy infantry surge round the temple.

Kharn leads from the front.

The Iron Hands' Terminators who had spent the first part of the battle concealed behind the hill, now prepared themselves for a charge by the Destroyers.

Staying true to form, the Iron Hands were once again able to destroy some World Eater armour.

As the World Eater Destroyer Squad charges home, a drop pod containing a close combat Contemptor crashes down in a perfect position.

Finally, the Iron Hands Terminators play a part in this operation.

As the close combat on the hill ensues, the Knight Paladin prepares to stomp the Red Butchers.

Meanwhile, the now infamous Iron Hands armour, lines up in a supporting role.

The Iron Hands finally crash landed their ram, it's primary weapon accounting for the Knight and Sicaran.

Combined firepower and the overwhelming close combat ability of the Knight Paladin was enough to destroy the Red Butchers. The metal beast strode across the battlefield like some triumphant gladiator.

On that final disgraceful note for the World Eaters, the game ended a resounding victory for the Iron Hands.

Without doubt, the man of the match award goes to the Iron Hands Predator Executioner, this little tank took out the Falchion and Spartan in spectacular style.

Moreover, it was a game played in the true spirit of 30k narrative wargaming, with tons of good sportsmanship displayed over the two days.

One small consolation for the World Eaters, Kharn survived yet again, cementing his legendary status as the immortal warrior of the 12th Legion