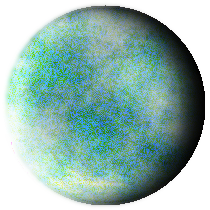 Caught out in the far reaches of the Ultima Segmentum and tipped off about the Heresy due to traitorous elements in their midst the 954th Expeditionary force requires resupply to continue their journey towards the core of the Imperium in order to aid in eliminating their traitorous brothers. Finding themselves in the Australis Ultima Sector the Fleet began preparing exploratory forces to confirm the data within their systems and hopefully resupply the expedition enough to continue onwards.

A small force aboard the Strike Cruiser 'Unyielding Fury' under the command of Company Herald Eran Akkad entered the Kaloran system and immediately made their way towards Oligos in order to take advantage of the nutritious plant life it could supply. Finding no sign of either Imperial or Traitor forces in the area a task force was dispatched to one of the larger floating islands capable of providing the fleet with food supplies, however closer scans indicated the presence of structures on this vegetation mass which matched known architecture of Orks. Landing near an old human settlement currently occupied by Orks under the command of a Boss named Orbaz Deffklaw, Herald Akkad led his meagre forces against the Orks in an attempt to take control of the settlement and provide a foothold on the island to allow gatherers to begin collecting the valuable plant matter that they had arrived for.

Taking the Cataphractii of Anvilus Squad up the center Herald Akkad was soon met by a wave of Ork Boyz determined to 'have a good scrap' with the heavily armoured Astartes, and the elite warriors were soon bogged down in a swirling green melee that seemed to never end after weathering firepower in numbers only Orks were capable of. Herald Akkad faced the Ork Nob in single combat but quickly slew the large xenos before returning to the main fight. Coming up behind the Terminator Squad, the Contemptor Dreadnought Ancient Elijah poured fire upon a second group of Boyz that were coming forward to join the fray, the damaged hero within being surrounded on all sides by a howling green tide as the Orks decided to 'get the big'un first', the leader of the group gouging out chunks of Ceramite with his Power Klaw until it finally tore the mighty Dreadnought's right leg off at the knee, bringing down Ancient Elijah and damaging his weapons systems.

Thankfully Anvilus Squad and Herald Akkad were able to prevent the Orks from overwhelming the stricken hero, hurling themselves into combat against the second ork mob to prevent the finishing blow from being struck against the irreplaceable warrior. Eventually these Orks would also be defeated unto retreat and the Cataphractii had to move forward with two of their number remaining by the damaged Dreadnought, their own wounds enough to warrant them being left behind.

With the obvious advance of Anvilus Squad and Ancient Elijah gaining the attention of the Orkish group the Veteran warriors of Caesarion Squad attempted to enter the compound from the northern approach, the vegetation allowing their Rhino to come close to the complex without throwing up large quantities of tell-tale dust. Thinking that they had avoided detection, the Veteran Squad entered the Orkish held building complex as stealthily as they could, leaving their transport behind to hold the entrance and prepare for a speedy retreat should that prove necessary. Their first indication of something going wrong was the explosion of the Rhino shortly after disembarkation, primitive Orkish 'Rokkits' slamming into the side of the APC and detonating within its hull, leaving the shell of the vehicle blocking the gate thus preventing easy withdrawal.

Caesarion Squad soon found itself in dire straights as an Ork Kommando unit sprung out of hiding to contest their intrusion. Emerging from the buildings nearest to their entry point the still smoking Rokkit Launchers told the proud Astartes just who it was that had destroyed their transport. Firing a furious volley at the charging Orks Caesarion Squad was soon forced to draw their combat blades and meet the dark-clad Kommandos in bloody hand to hand quarters, but not before turning some of their numbers into charred corpses thanks to their plasma guns. Lacking the heavy protection and enhanced strength of Anvilus Squad, Caesarion Squad began to take casualties from the cruel blades of the Orkish stealth team.

Having had his attention drawn by the explosion of the Rhino, Warboss Orbaz Deffklaw lead his bodyguard of Mega-Armour Nobz to investigate and soon rushed forward to join battle, as fast as his heavily armoured guards could move at least. Just as they had killed enough of the enemy to force a withdrawal by the Kommandos Caesarion Squad was forced to turn to face the charge of the massive Meganobz and their Boss. Veteran Sergeant Isaak Rueban bravely stood his ground as he was challenged to single combat by the Ork Leader and managing to survive the massive Ork's initial attacks with the huge mechanical claw which gave him his name, however the remainder of the squad was forced to fall back under the onslaught of the mega armoured bodyguards who had accompanied him, leaving behind the unfortunate dead whose mangled bodies showed the danger of the massive Power Klaws wielded by the Meganobz.

As the Warboss savoured his victory, Herald Akkad brought his terminator squad into the compound and immediately attacked. Anvilus Squad's fire only managed to singe the Warboss and his guardians before the two groups of heavily armoured warriors clashed. Herald Akkad and Warboss Orbaz engaged in single combat while their squads entered melee around them. Power axes whirled and Power Klaws slashed, the Force Field generators of the Astartes plate giving them the advantage as they slowly whittled away their opponents without taking damage themselves. Meanwhile Power Sword and Power Klaw each sought to dig into the soft flesh of their assigned foe, the Ork Warboss finding difficulty to strike his opponent even as the slightly faster blade hacked through his comparatively lighter armour. Somehow Orbaz couldn't find the opening he needed to kill the Herald of the XXI Company and just before the last of the Meganob bodyguards fell beneath the power axes of Anvilus Squad, its klaw buried in the torso of its killer, the canny Ork managed to position himself in such a way that he could escape the Compound, fleeing before the Terminators could consolidate and prevent his escape.

With the death of the Meganobz and the flight of the Ork Boyz and Kommando Unit the XXI Company had made their beachhead on Oligos, medicae and repair teams called in alongside additional Astartes to fortify their position and prepare for the next step in taking control of the floating island. With the escape of Warboss Orbaz there was no doubt that they would be facing the Orks once more.