In 880.M30, when the Imperial Explorator vessel Constance Heart first made contact with the Umbral kingdom, Explorator Captain Albinus Henricus gave the Queen of Umbra Major, Adrasteia I, the standard Crusade ultimatum: Join or Die. Adrasteia refused and, ever since that day, prepared for interstellar war. After making a non-agression pact with the forces of Horus, Adrasteia decided on a preemptive attack to put the potential Imperial invaders on the defensive.

The forces of the Umbral Kingdom initially targeted Childriss, the nearest Imperial frontier system, for invasion and dispatched the Umbral Second Fleet. In a bold surprise attack, Titans of Legio Revenantus and Risen Skitarii dropped on the quiet rural world of Faroe. The Revenantus force disembarked in the sheltered Senedo valley, where the mountain ridges would cover them from long-range fire from the cities of Childriss Center and Faroe Oceanus. The Umbral Forces swiftly moved to capture the passes out of the valley from where they could press the attack against Faroe's population and government centers. What they met instead were hastily-mobilized Faroe PDF units supported by Loyalist Titans of Legio Invicta. Unbeknownst to the invasion fleet, the Invicta Titans had recently completed refitting at the nearby Purity V forge and had been rushed to Faroe just in time. The two forces met for the first time in the Battle of Gore Gap, as the Loyalist Battlegroup desperately attempted to prevent the Revenantus engines from breaking out onto Faroe's costal plains. 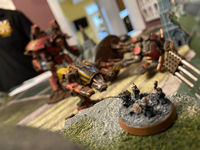 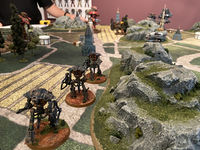 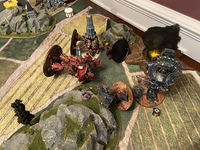 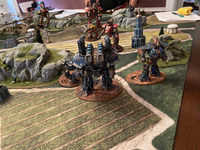