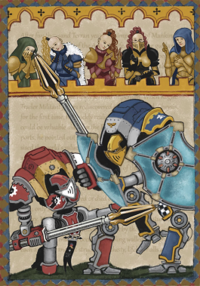 Extract from the Raynes Codex

Since the founding of the various Knight Worlds in the Australis Ultima Sector there has been a Hastilude.

Some Remembrancers have recorded that it started on a single world and slowly spread outwards to engulf the entire Sector while others claim that they have found evidence that it was created during a multi system war in order to provide an avenue to peace and was continued on as tradition. However it started the Hastilude has become synonymously linked to the Knight Houses and its Noble pilots throughout all Systems of the Sector.

Observers often, erroneously, claim that the Hastiludes are simply a series of games in which the Nobles partake at their pleasure. The truth and intent of the Hastilude is in fact far from that; like the Houses themselves, the event is steeped in rich tradition and laced with Chivalric ideals. Although each event will vary dramatically from host to host, the underpinning principles are the same; the Hastilude is a canvas on which the Nobles can display their prowess and chivalric virtues without threat or fear of retaliation or hostility.

No matter the current state of politics outside of the Hastilude, no matter whether certain Knight Houses are at war, have Blood Feud or any other number of influences; no hostilities are to take place in the system hosting the event. This simple and respected truce is the underpinning element to the Hastilude, no Noble, no matter how sinister, would ever consider breaking the Treuga Nobiles, the Truce of Nobles, for to do so would be a stain so black upon their honour that it would permeate their House for eternity. It is believed that only a single Noble has ever broken the Truce; there are different variations of the story rarely told in dark corners but each tell of the unification of dozens of rival Knight Houses in response to the offender and the utter annihilation of not only the Knight but their entire House and lineage.

So it has come to pass that the ancient and noble Knight World of Tuatha has declared its intent to host a Hastilude and has enacted the Treuga Nobiles upon the system until the closing of the 9th year of the 31st Millenium and the ending of the games. As such all conflict within the defined boundaries of Tuatha are now forbidden.