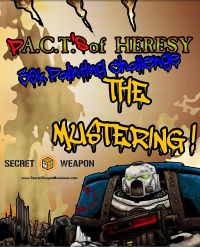 Who will you support?

Welcome to the inaugural running of the ACT of Heresy 30K painting challenge; The Mustering. The Mustering is an open event for participants from across the globe to encourage and motivate players to expand and paint their armies ready for the table top. The challenge is to paint legal units for your preferred faction(s) over the course of the event to the best of your ability. Each completed unit will add their point’s value to the factions total and the faction with the highest total at the completion of the event will be declared the winner (with all associated bragging rights).

To reward the participants at an individual level there will also be a series of monthly Inspections; mini competitions based around a certain theme in which the participants themselves vote on for a final five which are then judged, the winner receiving a small prize and associated title. In addition there will be a number of achievement awards at the end of the event which have nothing to do with the quality of the painting (for those of us who aren’t Golden Daemon painters).

A PDF version of these can be found here

Timing of the Event

All participants must have created their PACTs before midnight (AEST) on November 30th 2015, after this date the function to create additional PACTs will be disabled on the website. All PACTs must be updated and set to complete before midnight (AEST) on December 31st 2015 for their points to contribute to their associated factions, the PACTs will be locked after that time.

The entry must comprise of a single squad of infantry at MAXIMUM size if there is option to add additional models. For example a Legion Tactical Squad must consist of 20 Marines.

A model (or models) with something extra representing the Faction it belongs to (i.e. a Banner, Standard, Freehand icons), the model(s) can be infantry, vehicles or even an abstract item used as an Objective marker or suchlike.

A model (or models) which have had some level of conversion on them; while a simple head swap will qualify, it may not get many votes. This also includes complete scratch builds as well.

A unit which comprises of either the unit type Vehicle, Monstrous Creature or Gargantuan Creature, this includes Super Heavies, Flyers, vehicle squadrons etc.

The entry must contain some evidence of the enemy; it can be a duel underway (or recently completed), enemy casualties or other signs that the enemy has been engaged.

In addition to the five Inspections there will be a number of achievement awards which will be announced at the conclusion of the Muster. These awards are not focused on the quality of the painting but rather the contribution the participants have made to the event and their faction(s) overall. Only completed PACTs will be taken into account for the below awards.

The Mustering is set in a time before the Heresy, before the rise of the Warmaster and when everyone was all getting along, happy to be persecuting Xenos instead of attempting Regicide. For the Factions and scoring, there are no Loyalists or Traitors; it is a challenge to see which Faction can muster the most forces on behalf of the Imperium.

Each PACT which is made must be made in support of one of the above faction and must conform to their available unit lists. For example you couldn’t create a PACT for the Mechanicum which included a Legion Tactical Support Squad. All of the points from completed PACTs will then contribute towards the total points of the relevant Factions.

Conversions are not only allowed, but are strongly encouraged; they add a unique element to the model/unit and can often set them apart from countless others with a simple modification. Likewise Scratch Built models or models which are normally utilised for another role are also permitted, but must clearly represent the unit which it is being substituted as.

Special Characters must either use their actual model or be converted to make them appear closer to the character they are representing. For example a standard Tactical Marine cannot be nominated to represent Alexis Polux (or Alpharius!).

The photos attached to the online PACTs must clearly show the nominated units/models in a stage before painting has begun with some form of evidence of the date and a completed stage. Additional photos of in between progress are not required but are welcome and encouraged to help build up a sense of momentum and to allow observers to comment and encourage participants. Digital modifications are permitted for PACT images, like photo shopped backgrounds and suchlike as these final images will not be judged. If you do this however and you intend to enter that unit into an Inspection, make sure that you have an image without Digital modifications.

PACTs may include any commission work which they have contracted out, as long as said commission did not start before the events commencement date and evidence of progress is included as required. However commission work is NOT permitted in the Inspections!

Q: Are dedicated transports legal entries in their own right?

A: Yes they can be entered as standalone entries for the points mentioned in the relevant section of the list or entered as part of a larger PACT.

Q: What about allies?

A: Allies must be entered into their own PACT with the correct faction nominated. For example if you are painting some Sons of Horus allies for your Word Bearers, you would need to create a separate PACT of the Sons of Horus and those points would go to their Legion, not the Word Bearers.

Q: Can I include weapon upgrades or variants into the points total?

A: No, you do not include any upgrades like Special Weapons, Artificer Armour, Extra Armour, Sponsons etc into the point’s total. Each unit is calculated based on their base points without upgrades; the only exception is if you can add additional members to the squad.

Q: Do I have to complete my first PACT before starting another?

A: No, you can have as many PACTs active as you want.

Q: Do all of the units in the vow have to be from the same faction?

A: Yes! Every unit/model included in a PACT must be for the same Faction, if you have allies or other units which you want to paint, you can simply create another PACT.

Q: Most of my PACT was complete do I get partial points?

A: No, the entire PACT must be completed for it to count, sorry.