The Corruption of Office 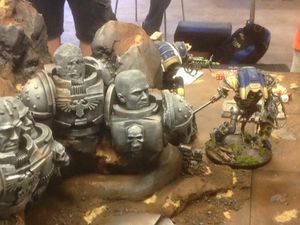 Although the Governor of Trugoy was quick to reaffirm his loyalty to the Emperor, it was a hollow pledge indeed; resentful at the method of Compliance and the ignorance displayed by the invading Imperial Army, the embers of rebellion had never truly been smothered. Even before the Heresy erupted Coreward the ruling families of the planet had reverted to the practices of the clan hives before the arrival of the Imperium which involved ritual sacrifice and bloody infighting amongst the nobles, using the Underhive populations as pawns and cattle. 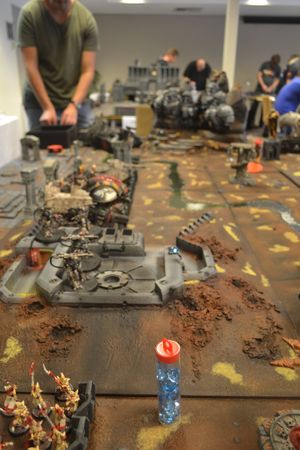 Taking advantage of the coming battles and subsequent chaos which would result the Governor implemented a series of mass ritual slaughters deep within the Underhive believing that this would increase his personal power. Resurrecting the suppressed cult religion of the hives the Governor planned to elevate himself with the powers of the old gods and declare independence from both Horus and the Emperor, delivering the forces of both as sacrifices.

Unaware of the Governors true plans the Loyalist build up on Trugoy had gone well, with the cooperation of the Governor the Loyalist commanders were able to make planet fall and assemble their forces quickly and efficiently. Hoping for a well defended base of operations, this changed at the last minute when the Governor reported that Traitor forces had infiltrated his defense network and suppressed the vast array of ground weapons which were intended to hamper the enemies own landing attempts. An ill-omened start to the Campaign indeed. Expecting fierce resistance from the local System forces harboring the fleeing Loyalist army, the Warmaster’s commanders were surprised and somewhat suspicious at the lack of defensive fire from the ground based facilities. Unwilling to let their prey escape them for any longer they ordered a full scale landing to commence the engagement before any of the larger guns can be brought to bear.

After the initial clash of forces on the planets surface the Governor revealed his true face and declared himself independent of the Imperium! Shunning not only the Emperor but the Warmaster as well, it became clear that it was his intention to lure both forces to his world in an insane mass sacrifice to his the gods of the world’s pre Compliance religion. With the primary Hive in virtual rebellion forces from both sides needed to be sent in to attempt to assert control over the government and attempt to usurp the rogue bastions from within. However it was clear that the Hive itself had long ago reverted to its old religion in its resentment to its forced Compliance, as part of that mass ritual sacrifices were being performed in the Underhive on a daily basis and while this placated the masses, it had begun creating massive disturbances in the Warp. It was too late the stop the sacrifices already underway, but invading force had to choose whether their forces would suppress any future rituals if they gained control of the Underhive. 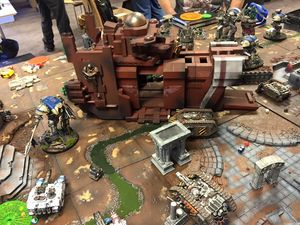 Striking hard and fast the Loyalist forces gained quick control of the Underhive and sent multiple strike forces to deal with the rogue elements. With the Governor and the majority of his lackey’s dead it left a large amount of upheaval in the Hives which further cleared the way for a new power to take command. The Loyalist forces made strong headway's in securing the major sections of the Hives and surrounding tactical areas, however the occurrences of the last major conflicts showed that things could change at any moment. It was also clearly evident that the world’s old religion, at some point, had become corrupted and was now little more than a chaos worshiping cult.

Multiple Daemons summoned by the sacrifices in the Underhive began appearing amongst the Warmaster’s forces and while initially though to be allies, they began waging their own war of their choosing, whether there was any method to their attacks and who they supported is unknowable.

In the final stages of the campaign on Trugoy itself, the Loyalist forces consolidated their hold on the Hives and the planets tactically important sites, even against both the Warmasters regular forces and their corrupted allies. With their control over the Underhive all but complete they reinforced the conditions of the Imperial Truth in an attempt to prevent further Daemonic incursions, but it appeared that the damage may have already been done and by suppressing their religion for a second time, the forces of the Emperor reminded the people of Trugoy of the original compliance. Seeds of rebellion quickly sprouted into open revolt, forcing the garrisons to fight wars on two fronts.