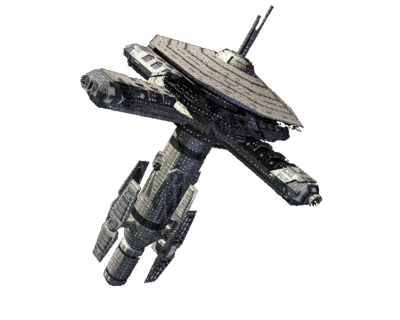 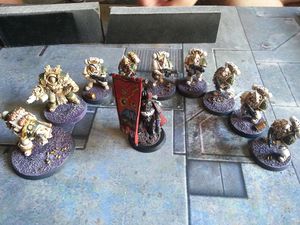 With the destruction of the Light Cruiser Pacificus the Nestro Dockyards sustained significant damage to one of its primary construction arms. Rather than risk the entire station the crippled section was jettisoned in order to stabilise the Dockyard, leaving the severed arm to begin its fiery descent into the atmosphere of the gas giant Fuhn. Unable or unwilling to fully evacuate the section, hundreds of Astartes and their human allies rapidly became scattered amongst the ruined remnants of the Stations construction arm, desperately trying to regroup and find avenues of escape before it is too late. With little to no communication available and the chain of command largely broken, former loyalties dissolved and new temporary alliances were forged.

Amidst the twisted carnage of the shattered bulkheads and corridors, bolter muzzle flashes competed with electrical flares to illuminate the murder grounds from one room to the next. There was not reprieve as Astartes, Mechanicum and Militia alike fought for survival in a desperate bid to find a way off the rapidly descending severed docking arm. Entire platoons of men were cut down as squads of Astartes charged from one area to the next, checking vainly in the slight chance that an escape pod may still be active and available. There was no organised evacuation, or rallied defense from the Loyalist, not even a coordinated sweep by the Warmasters forces, instead it was a chaotic rampage of warriors who had began to learn the meaning of fear.

A group of Word Bearers came together to eradicate an encountered Ultramarines squadron, all three forces trying to gain entrance to a maintenance section. While stalwart to the end the warriors of the XIIIth were rapidly surrounded and massacred in an overly bloody fashion allowing the Word Bearers access to the room and inside a single four man shuttle. Within an instant the XVIIth Astartes turned on one another, the first to fall, killed by a bolter round through the back of his head. Even when there were only four left standing it was not enough; perhaps the fight to triumph over each other took hold or perhaps their dark tampering had unhinged them, but the fight continued until there was only a pair of comrades remaining. Victoriously they boarded the prize shuttle moments before the plasma generators, ruptured during the firefight, exploded, removing the entire scene of the atrocity from reality.

Not even two hundred meters away, the corridor lights flickered with the explosion of the shuttle as a unit of Death Guard sprang an impromptu ambush on a squadron of the VIIth. Their initial strike eliminated the Imperial Fists forward scouting marines, their blood creating drifting walls of red mist in the zero gravity section. Attempting to counter the attack a number of yellow clad Breachers launched themselves from the walls drifting forward to engage the traitors, zealously protecting their commander and his sacred cargo. With little leverage and even less cover the Fists were quickly surrounded and dispatched by the tactically placed XIVth and in less than a minute the two white clad corpses were eclipsed by the nine yellow floating freely in the corridor, only a single figure of the VIIth remained; his banner unfurled, caught in a frozen wind, his plasma pistol glowing blue ready to avenge the death of his men. Another minute passed and the Fists Champion emerged through the bulkhead at the other end of the corridor, the remaining nine Death Guard now lifeless and bloodied.

Dozens of other skirmishes flashed throughout the crippled station arm, hundreds of deaths, fighting over the privilege to discover that there was no escape. Those that weren't slaughtered by the madness inside were incinerated in their steel tombs as the atmosphere of the Gas giant, Fuhn, began to caress the encroaching wreckage. Only a single vessel manage to disentangle itself from the mass grave, a tiny black dot against the suddenly glaringly bright flare of the docking arm in its final death throes, but no one was watching. The warriors aboard the severed arm abandoned by both masters and declared dead before they were, those few to survive, now masterless and orphaned.

Reports from the Front 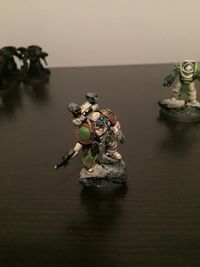 Viktor Strug, aka The Plague Doctor, is a XIVth Legion apothecary. Rumoured to be a close friend and confidant of Lord Typhus, Strug is held in high regard by the command echelons of the Traitor Warmaster’s Forces, for his particular set of skills, honed over a century of service to the Death Guard. Strug, although a member of the apothecarian has also been granted the field equivalent rank of centurion. Currently intel suggests that Strug has been tasked with protecting, and perfecting Mortarion’s stores of biological weapons, including stockpiles of the world eater virus.

Although Terran by birth, Strug was quickly singled out by the lord of death for his affinity with virus weapons and nerve agents. Currently his reasons for being on Nestro Station can only be guessed at, however it is beyond doubt that they are nefarious in nature. Strug has a history of appearing at the edges of the Heresy’s largest conflicts and using his deadly expertise to sow fear and dread throughout our forces. It is said that Strug has been seen on Nestro station in the company of one of Mortarion’s own personal bodyguard; the deathshroud, this is contrary to records stating that these hulking terminators never leave the lord of death’s side, whatever the truth is one thing is for sure: 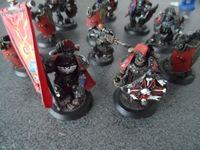 A Crusade of the Imperial Fists 1st Company, the Templars, L-VII-3177 was dispatched to the Kildrech System by Sigismund shortly before the commencement of the Heresy. Initially unaware of the developing civil war Coreward the Kildrech Crusade arrived in the Savage Reach and set about their mission; to secure an Imperial Fist outpost on Kildrech Prime which was left in place to guard a reliquary containing the remains and honours of hundreds of Legio VII brethren fallen in this sector of space, awaiting return and internment to the Phalanx.

Before they could complete their mission, however, the chaos of the Heresy spilled into the Australis Ultima sector and communication with, let alone travel to, the Phalanx has been severed. Instead the Kildrech Crusade now maintains a vigil over their fallen comrades and endeavour to combat the Heresy where ever they can. During their time establishing the fortifications and pacifying the local System a strong bond was formed between both the local Knight House Kildare and the Mechanicum Force (Legio Crucius Templari) who were granted control over Cerberus. This bond was cemented into a formal Oath Bond Alliance between the three forces creating a powerful trio within the system. While originally comprised of Templar Brethren and an escorting force of Phalanx Warders, the Kildrech Crusade has become a beacon and rallying point for estranged Imperial Fist forces caught in the chaos of the Heresy, their ranks swelling steadily as more of the VIIth find their way to the fortress at Kildrech.

Having sent a large contingent to the Trugoy System in an attempt to assist with the Loyalists stand against the Warmaster’s forces, the Kildrech Crusade suffered substantial loses including a number of their senior commanders, one of which bore a sacred banner dating from the earliest days of the Great Crusade. Driven by the need to retrieve the bodies of their comrades and the fallen relic a small force of Templars under the command of Cadimus Gerhard, a promising Captain tutored by Sigismund himself, boarded the Nestro station with a small squad of escorting Warders and a trio of Reconnaissance Marines. With the final Traitors counter assault happening all around them the small strike force still managed to break through enemy lines and locate not only the Company’s Banner but also the brother tasked with its display, still alive and fighting! 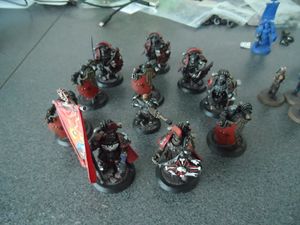 Before their extraction could be completed, however, the segment of the orbital dockyards they were on was struck by the wreckage of the Pacificus and jettisoned to prevent the entire station being dragged into the gas giant Fuhn. While having taken some casualties, the Strike Force is now fighting its way free of the chaotic station debris in an attempt to make their way back to their primary force and return to Kildrech.

The sense of betrayal, distrust and deception became almost palpable for the Kildrech Astartes, their comrades no longer trustworthy, their goals questionable and their faith shaken. Having taken heavy casualties and significant lose of armour and being stood down by Loyalist Command, the detachments commander ordered his Standard Bearer, Ychne Ghrem, to Nestro in preparation for their departure back to the Kildrech System. It was at this stage that the greatest treachery occurred; with the fighting on Nestro centered around the Fists Cruiser Ghrem had no choice but to lead his squad into the death zone of the station and take part in the attempted repelling of the Traitors boarding actions. When the destruction of the Pacificus forced the ejection of the entire docking arm that Ghrem had been fighting on, and Loyalist Command had declared all allied combatants KIA on board, the commander of the Kildrech Fists flew into a rage and confronted the senior commanders of the Loyalist forces.

While his commander was demanding explanations the leader of the Templar contingent, Cadimus Gerhard, led a rescue mission into the rapidly descending arm of Nestro in order to recover Ghrem and the sacred relic banner he bore with him. The moment the rescue team entered the chaotic wreckage it was evident that all command and loyalty had broken down, the first enemy to face them had been a hysterical Astartes of non other than their own Legion, the deranged Fist opened fire without hesitation and after attempts to subdue him failed, the Templars, under the protective shield wall of their Warders, cut the warrior down. From that point time stretched to what seemed like an eternity, the team moved from corridor to corridor, coming under fire from anyone they encountered and responding in turn. Every corner revealed more atrocities of desperate, fearful, men trying to escape their fate and, worse, others simply taking advantage of the situation and reveling in the chaos.

After only thirty seven minutes, which had seemed like hours, Gerhard located the Banners locator transponder and with it, the gruesome figure of Ychne striding across the blood spattered decking. Having lost the rest of his fellow Command Squad Ghrem had fought on, experiencing the same disgust at the ease with which the loyalty of his cousins had broken down. Reunited with his comrades, Ghrem led them back to their waiting evac ship, through areas of complete tranquility and vast hangers exposed to the void and filled with the carnage of war.

While there have been reported sightings of certain Astartes believed to have been aboard the Nestro docking arm, official records still have all known warriors aboard the facility listed as Killed in Action, believing that none survived the fiery descent into the gas giant of Fuhn. 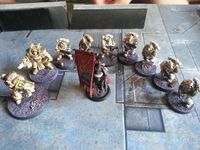 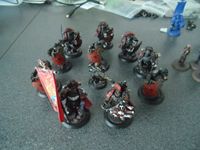 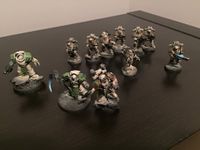