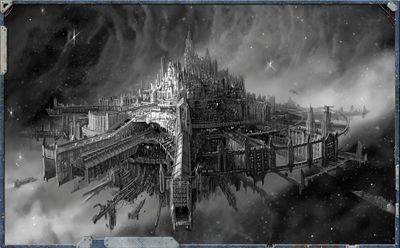 Welcome to the Sixth month of the SECOND GOLLOCH WAR

SEC Idre Anchorage 7 is a massive orbital station locked in a geostationary orbit above what is nominally considered the southern pole of the Gas Giant Hestia. The origin of the station is unknown, and so are most of its capacity, even though it is run as a refueling post for star ships passing through the Golloch Cluster. The appearance of the Station itself is no less mysterious, given its vaguely Imperial design, and the fact that no records exists of a station of this magnitude even existing when the 217th Expedition Fleet arrived in the local system adds confusion to the mystery. A station this size would not have gone unnoticed by the IVth and XXth Legion forces exploring the planet around which it is orbiting.

It is there. Plain to see for those who look with closed eyes. The dreamers. The guardians. The Children now walking the stars. The Anchorage is lost to us, yet another one takes its place

Its location as a fuel station on one of the stable space lanes through the Golloch Cluster has made SEC Idre Anchorage 7 a haven for rumors and rogue data. Everything that is worth knowing or brokered for can be found within the echoing halls of the station where the walls themselves, if not the street urchins, seem to record every move, errant glance and word spoken out-of-turn. Disregarding its value as safe harbor and resupply point, the true value of the Idre Anchorage 7 to outsiders presents both the largest reward and most present danger, the power of words.

The empty halls ranging far and wide across the top decks of the Station present a prize worthy of the risk of nominally assaulting the station. The Automata and Data-Servitors “lost” roaming the hangars, empty hab-blocks and storage yards make for easy pickings… And the knowledge here can lead to great reward, or damnation.

Setup an Aus30k account for your army, find someone to play and choose a game type from the list below, all of these have been formulated to simulate the fighting on Paradisum Mundi. Once you’ve played your game, upload a skirmish report here!

The battles for SEC Idre Anchorage 7 can be played using the mission provided or using standard Crusade army list forces, still using the Centurion restrictions, on a suitable table layout. Battles of Battlefleet Gothic could be fought to control space near the Station using Scenario Four: Surprise Attack(pg.72) and Scenario Seven: Planetary Assault(pg.76) from the Battlefleet Gothic main rulebook. If you choose to play these missions you can either play with the standard BFG rules for Imperial, Space Marine and Non-Blessed Chaos ships or a suitable BFG 30k fan mod.

This mission is played on a 4x4 Zone Mortalis board; The two forces must control the data servitors wandering around SEC Idre Anchorage 7, following the initial assault. This mission uses four data servitors as objectives, or suitable models on a 40mm base. Take turns deploying these, only one can be placed in each quarter of the board and they cannot be within 6” of a table edge or other data servitors. Data servitors cannot be destroyed nor removed from play.

Before the game begins, both sides should divide their forces into two roughly equal groups based on their number of units. They must then decide which of these two forces is to be their spearhead and which is to be the reserve. This represents the larger force moving through the Zone Mortalis without knowledge of enemy contact. The sides roll off, the winner choosing which table edge they wish to be their deployment zone, and deploys the spearhead portion within 6” of their table edge. Their opponent then deploys their spearhead portion within 6” of the opposite table edge.

Data Hunt! Capture the roaming Servitors. Each servitor is worth 1 Victory point to whomever controls it. The side with the most Victory points at the end of the game wins.

Slay the Warlord and Attrition

The game has a variable game length as per a Standard mission.

Wipe-Out! Regardless of any other condition, if at the end of the game your enemy has no units left on the table, you are victorious.

Wandering Automatons: At the beginning of each player’s turn, the player may move D3 servitors up to 6” in any direction. Roll for this every turn and the servitors may not move into dangerous terrain or off the board as their automatic hazard protocols will not let them.

Cybernetic Control: A model with a cortex controller may elect, once during its controlling player’s turn, to move a data servitor within 18” up to D6” in any direction. The model does not need line of sight to use this ability. The same servitor cannot be moved more than once using this ability

This mission could alternatively be played as a standard Age of Darkness mission using the Centurion restrictions. This means that the game board can be scaled up to a 6x4, provided that the board is heavily covered with terrain. This would represent engagements going on in larger structures and chambers, such as the cafetorium, loading docks, or major storage yards.

Panicked crewman: It… The station just materialised out of nowhere!

Astartes: Get a reading on it now! [alarms sound in the background]

Ship Commander: Are we recording the broadcast?

On general and legion broadcast:

THIS IS THE HESIOD. We are orbiting the Gas Giant known as Hestia. A space station materialised in orbit three hours [Terran Standard] ago. We are invesi…..

A note is clutched in the hands of a crewman. It seems to be a manual data entry for the log…

“ We investigated the appearance of the station. No database matches. All attempts to contact or board the station have failed…. Beware the poisoned arrows of Idre. -Ship Commander Oecron”

This battle is fought between two forces of up to 1000 points and using the Combatant Zone Mortalis force organisation chart. This is to represent a small force teleporting aboard the Hesiod to examine the derelict frigate. Only reserves with teleportation ability are allowed.

Stratagem points will be generated as per the Zone Mortalis rules.

Each Stratagem costs 1 sp and can be taken multiple times.

This mission is played on a 4x4 Zone Mortalis board or similar, representing the inside of the frigate Hesiod. The layout of the board should feature a large room, representing the ship bridge; at least 3 corridors leading to the bridge should be included in the layout. In addition, intersecting corridors, secondary control rooms etc. could also be used.

The objective (Ship’s log) is placed in the centre of the bridge. The doors to the bridge are sealed, all other doors are open. Doors can still be affected by rolls on the Catastrophic Damage table each turn.

Ship’s log: The side that controls this objective at the end of the game gains 2 victory points. (If played in a campaign in the area around Hestia, controlling this log could (if the players agree upon it) be beneficial for the victor of this battle when next their army takes to the field.)

Slay the Warlord and Attrition

The game has a variable game length as per a Standard mission.

Wipe-Out! Regardless of any other condition, if at the end of the game your enemy has no units left on the table, you are victorious.

The Ship’s log: Place a suitable marker on the bridge. This marker represents the Ship’s log and needs to be escorted to the players deployment zone for extraction. A model in base contact with this marker will be considered as “carrying it” and can transport it 6” per turn. No special movement can be taken while carrying the Ship’s log (e.g. Run, jump move). The model carrying it cannot assault, but can defend themselves if they are charged. If the model moving the objective is killed, it returns to being stationary until another model moves into base contact with it and picks it up. When the marker isn’t being carried it is considered as not being under control of any player.

This scenario is representing a mission to board, search and extract data on a derelict ship gradually being pulled into the atmosphere of Hestia. The battlefield is treacherous and the gravitational pull is gradually tearing the ship apart. It is a volatile environment and it might at times seem like the ship itself presents the greatest threat to any boarders. Keep this in mind when playing, it is all just for fun!