The Tomb of Galahad~ACT of Heresy 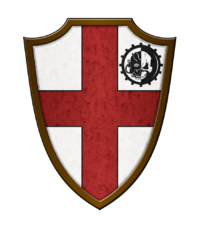 As the final salvos from the Traitors fleet crippled the remaining Loyalists cruisers covering the main forces retreat the hooded Watcher began to move. Sliding past the lifeless bodies of hundreds of Astartes and their allies trapped in a perpetual orbit of the mighty Ark the Watcher took stock.

The discovery of the Ark had been unforeseen, they had not considered the possibility that instead of fleeing with the other ships they had instead hidden it away from them. With its re-emergence however it changed little except and opportunity to accelerate the time frame. Triggering the conflict between the Imperial forces had required little manipulation; a spark to a fuel soaked tinder stack. Controlling the course of the conflict however proved impossible.

During the initial stages of the battle, where neither side had gained an upper hand, movement through the warzones was an easy matter. The chaos and carnage had allowed the Watcher to move freely and search for clues, but time was not co-operating and the forces began to consolidate their hold on areas. At first it was only the Inner Hull and the Ships Auxiliary Bridge held by those who followed the Warmaster while the Outer Hull was rapidly secured by the Loyalist forces.

The loss of access to the Auxiliary Bridge systems had hampered the Watcher, without time to search for another access point the investigation had to be continued using alternative methods. The possibility of the Imperial forces using the Bridge systems for a similar purpose was dismissed as officer after officer blindly pushed buttons with little regard. The ensuing pandemonium as Communications were shut down, point defence guns began firing and even ship wide shut downs alleviated some of the Strangers movement constraints. The loss of the Agri deck as it was turned into a volcanic wasteland was regrettable, the food stuff it could have provided would have been beneficial for the coming campaign.

The discovery of the cache, however, came too late as the Warmasters forces secured the Observation Dome and its treasures moments before the Stranger became aware of its location. With the fighting dying down in that and other decks, movement began to become difficult and gaining access to the main repository was impossible. Taking note of which faction within the Traitors had sent forces into the building, the Stranger had withdrawn.

Shaking itself from its reverie, a very much human habit it had adopted, the Stranger continued to move across the outer hull of the ship, avoiding the numerous Loyalist forces now consolidating their hold. It seemed that the Imperial staging post which they had built had too fallen to the Loyalists but without control of the systems space lanes, which the Traitors now had, the entire area would be a stalemate for weeks. The perfect situation for the next phase.

Nodding to itself and wringing its cowled hands, another human aspect it had taken on, the Stranger boarded his shuttle clamped to the darkside of the Arks hull and began its slow, shadowy journey back to its own forces.